Brexit: Boris Johnson will take no-deal departure ‘if we have to’

UK prime ministerial candidate Boris Johnson says that he is "proud" to take personal responsibility for the Brexit referendum passing, adding that as PM he would leave the EU without a deal on October 31st if necessary. Video: Sky News/Reuters 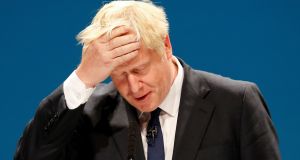 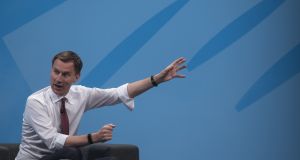 Tory leadership frontrunner Boris Johnson said on Sunday he would get a Brexit deal but repeated he was prepared to leave with no deal if necessary.

“We will get ready, in a very sensible and sober way, to come out on Oct 31, with no deal if we absolutely have to,” he said. “But we will get a deal with our friends and partners.”

Speaking in a Sky News interview, Mr Johnson claimed he was able to “lead us out of this mess”. When pushed, he once again refused to rule out suspending Parliament to push through a no-deal exit, although he said it wasn’t something he liked the idea of.

The former foreign secretary also said there is cash available to fund his proposals for tax cuts and higher spending on education and policing. He said there was “headroom available” in the Treasury for his plans, and argued that”sensible tax cuts” would boost growth and revenue.

He also said he was prepared to increase borrowing to “finance great infrastructure projects.”

Fellow leadership contenderJeremy Hunt has said he could refuse to pay part of Britain’s £39 billion (€43 billion) exit bill to the European Union.

Mr Hunt said he would “not hand over a penny more than is legally required of us” if negotiations with the EU failed.

He also revealed he would deliver a speech on Monday that will “turbocharge” plans for a no-deal exit from the bloc on October 31st.

“As a businessman I always paid my bills. That being said, if we leave without a deal I will not hand over a penny more than is legally required of us,” he told the Sunday Times.

“Anyone who thinks I am going to write a blank cheque to the European Union is sorely mistaken.”

Mr Hunt said both he and Mr Johnson wish to change Britain’s withdrawal agreement but noted that he would not exit from the EU on Halloween if a deal was close.

He added: “We will know by the beginning of October if it’s going to be possible to negotiate a deal that we are going to be able to get through the House of Commons. If it isn’t, I’ll take us out without a deal.”

Chief Brexit negotiator Olly Robbins will reportedly quit his role shortly after the new prime minister takes up his post at the end of July.

His departure is the latest in a wave of top civil servants dealing with Brexit who have announced they will resign rather than take on the challenge of delivering Brexit within 100 days under the new leader. – PA