Haredi exemption from military service in Israel under threat 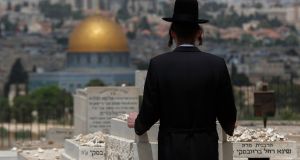 An ultra-Orthodox Jew prays on Mount Olive in east Jerusalem: Avigdor Lieberman, an ultranationalist ex-defence minister, wants to capitalise on a turn in public opinion against the Haredi. Photograph: Atef Safadi

At nearly 50 years of age, Yitzhak Pindrus would prefer the traditional life of an ultra-Orthodox Jew, sequestered in a religious school poring over the Torah far from the distractions of modern life.

Instead, Pindrus has thrown himself into the pandemonium of Israeli politics. He is one of 16 ultra-Orthodox members of the Israeli parliament, representing a cloistered world of nearly one million ultra-Orthodox Jews, known as Haredim, whose outsized political influence is long established.

But this year their clout is being tested by a threat to one of the most cherished principles of Haredi life – the right of young men to skip Israel’s mandatory military service by sequestering themselves in yeshiva religious schools.

Last month, the 70-year-old exemption scuttled four-time premier Binyamin Netanyahu’s attempt to cobble together his fifth coalition government, as his refusal to comply with an ally’s demands that more ultra-Orthodox be forced into conscription left him short of a parliamentary majority.

Now, the debate over integrating the Haredim into modern Israeli life has become the central issue in a repeat election this September.

Pindrus – who was mayor of the overwhelmingly-ultra-Orthodox town of Beitar before winning a seat to parliament – says Haredi Jews must be politically active to avoid being pushed into the sins of modern life, first and foremost via forced conscription.

“We have been in an ongoing battle between the traditional Haredi community and secular Zionism,” he says. “We have no choice but to be in politics – without power, our voters don’t exist.”

For decades, ultra-Orthodox politicians blessed by their rabbis have muscled their way into coalitions, run parliamentary committees and toppled governments, all in the service of codifying the separation of their lives from modern Israel’s.

But now they must pit themselves against a steadfast opponent in the form of Avigdor Lieberman, an ultranationalist ex-defence minister and on/off Netanyahu ally, who is seeking to capitalise on a turn in public opinion against the Haredi.

He controls five parliamentary seats that could have given the prime minister the 61 seats he needed for a majority. But Lieberman made his support conditional on ending an agreement that keeps the vast majority of Israeli Haredim out of military service, bar a few thousand who volunteer for a Haredi battalion. Netanyahu could not deliver.

Lieberman, who represents a largely secular, Russian-speaking population of Jews from the ex-Soviet Union, was capitalising on an increasingly common view that the burgeoning Haredi population shirk their civic responsibilities – only half the men work – while feasting on government subsidies. His stance remains popular: polls show that he may double his seats in the September elections.

Haredi opposition to conscription began with a compromise reached between the nation’s founder, David Ben-Gurion, and the rabbis representing a few hundred ultra-Orthodox families in 1948, which exempted 400 young Haredi men from military if they went to yeshiva instead.

“There is a deep moral question here – why should the Haredi mother have her sons around her dinner table, while the secular mother has sleepless nights?” says Rabbi Yehoshua Pfeffer, who heads the Haredi division at the Tikvah Fund, a charity.

The ultra-Orthodox rejection of modern western culture started in eastern Europe and carried over into an ambivalence towards the modern Israeli state, especially the army. The Haredim were able to build a parallel society with their own school system and neighbourhoods, taking advantage of the latitude granted to them by successive governing political allies.

In their sequestered surroundings, the Haredi organise their lives much as the eastern European Jews of the 18th and 19th centuries. Their men study the Torah almost exclusively, while the matriarchs work to support the family and have an average of seven children each.

They shun smartphones and the internet, maintain a strict sabbath, when the police block off the roads into some of their communities, and many shun modern Hebrew for the traditional Yiddish language. Outside their neighbourhoods they stand out with their modest, archaic clothing – wigs for women, old-fashioned black suits and often ornate hats for the men.

But as their numbers grow – 11 per cent of Israelis are Haredi and one-fifth of children in kindergarten are – their lives often collide with the modern world. The clashes are most visible on Fridays, when devout synagogue-goers run into early evening partiers on the streets of Jerusalem.

But with Lieberman campaigning on conscription, the prospect of him pushing a Bill to force more Haredim into the military is a much bigger threat. Some Haredi leaders are open to building bridges between the Haredi and modern worlds within defined parameters. But the political crisis has forced an unwelcome all-or-nothing debate about integration.

“Our understanding is that we are a minority group in Israel, and the most crucial imperative is to preserve our unique way of life,” said Rabbi Pfeffer. “This is the most urgent issue in front of the community – being able to raise their children without the threat of secular and western culture.” – Copyright The Financial Times Limited 2019