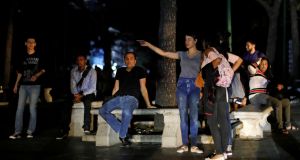 People gather at the park during a blackout in Caracas, Venezuela on Thursday. Photograph: Carlos Jasso/Reuters

Venezuela shut schools and suspended the work day as its worst blackout in decades paralysed most of the country for a second day on Friday, while China warned Western nations against meddling in the South American country’s domestic affairs.

Power went out across the recession-stricken country on Thursday afternoon due to a problem at Venezuela’s main hydroelectric plant, the government said, calling the event an act of “sabotage” by ideological adversaries.

While blackouts are routine in many Venezuelan provinces, nationwide power outages under the ruling Socialist Party have never extended for more than a day, despite five years of gruelling recession and widespread and severe shortages of basic goods.

Opposition leader Juan Guaidó, who most Western nations recognise as Venezuela’s legitimate head of state, criticised the government for bungling the country’s energy supply and said Nicolás Maduro, the president, was the one sabotaging the nation.

Humanitarian aid trucks went up in flames last month when Mr Maduro deployed troops at the Colombian border to prevent the opposition from bringing in relief supplies.

Despite international outcry at Mr Maduro’s decision to turn back the aid convoy, Elliott Abrams, US president Donald Trump’s special representative for Venezuela, on Friday ruled out the use of force to deliver humanitarian assistance.

Washington, which has led calls for Mr Maduro to step down, pledged on Thursday to “expand the net” of sanctions against Venezuela, including more foreign banks providing financing to the government.

Beijing, which together with Moscow backs Mr Maduro, issued a stern warning on Friday about the risks in imposing sanctions and interfering in Venezuela. “External interference and sanctions will only exacerbate the tense situation,” said the Chinese government’s top diplomat, state councillor Wang Yi. “There’s already enough of such lessons from history, and the same old disastrous road should not be followed.”

Adding to Venezuela’s economic woes, a World Bank arbitration tribunal ruled on Friday that Mr Maduro’s cash-strapped government must pay ConocoPhillips more than $8 billion for seizing the oil and gas company’s oil assets as part of a wave of nationalizations. Venezuela can still contest the award.

In Caracas, state television and social media users reported that power had returned to some neighborhoods on Friday, though much of the city remained without service.

It was not immediately clear if the power shortages affected oil operations in the Opec nation. State oil company PDVSA did not respond to a request for comment.

Scores of people walked through the streets of the capital early in the morning due to the closure of the metro, while others took the few buses that were running. Many did not realize the government has suspended the work day because they could not watch television or listen to the news.

In the upscale Caracas neighborhood of Los Palos Grandes, several hundred people gathered for a rally where Mr Guaidó was expected to speak.

“Everyone is hoping that with Guaidó, the country will go back to being normal,” said Yamila Oliveros, a 53-year-old architect. “That’s all a person wants, to live normally. That when I open the tap, water comes out. That when I flip the light switch, the lights come on.”

The opposition has set protests for Saturday in the capital as it seeks to maintain pressure on Maduro to step down.

Venezuela has become mired in a major political crisis since Mr Guaidó declared himself the president in January and denounced Maduro as an usurper.

Mr Maduro says Mr Guaidó is a “puppet” of Washington and dismisses his claim to the presidency as an effort by the Trump administration to control Venezuela’s oil wealth.

Mr Maduro, who was re-elected last year in a vote widely viewed as fraudulent, blames Venezuela’s economic crisis on a US-backed campaign to wreck the economy and force him from power. Mr Maduro has consistently attributed major power outages to sabotage by opposition adversaries, without providing evidence.

Government officials on Thursday said the massive Guri Dam was damaged by a cyber attack, and initially said power would return within three hours. They have not updated their timetable.

“We will once again defeat this electrical sabotage. We are going to recover this important service for the population,” vice president Delcy Rodriguez said in comments broadcast over state television.

Thermoelectric plants, which are meant to back up the hydroelectric dam, are operating well below capacity, said Miguel Lara, an electrical engineer who formerly ran a state agency that oversaw the national power grid.

He added that shortages of parts as well as a lack of skilled technicians, many of whom have fled the country, will complicate any efforts to repair any damage. More than three million people are believed to have left Venezuela amid the crisis.

The UN refugee agency said on Friday that Venezuelans had lodged nearly one-quarter of a million asylum applications in 2018 alone, double that of the previous year.

Mr Maduro’s critics say his government has mismanaged the power sector since late socialist leader Hugo Chávez nationalised it in 2007 while setting aside billions of dollars for power projects that were swallowed by corruption.

Venezuela suffered major blackouts in 2008 and 2013 that affected significant parts of the country, but they were resolved in less than six hours.

Local power outages continue to be chronic, particularly in the sweltering western state of Zulia where residents complain of days without power or with limited electricity and voltage fluctuations that damage appliances. – Reuters