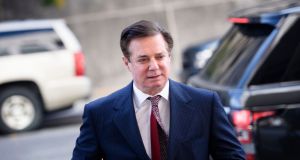 Paul Manafort was expected to face up to 24 years in prison. File photograph: Brendan Smialowski/AFP/Getty Images

Paul Manafort, US President Donald Trump’s former campaign manager has been sentenced to 47 months in prison by a judge in Virginia for bank and tax fraud charges.

The 69 year-old arrived to court in Alexandria in a wheelchair on Thursday as he deals with complications from gout, with members of his family present in the courtroom.

He was expected to face up to 24 years in prison – a sentence that would effectively mean that the former Republican operative will spend the rest of his life behind bars.

Thursday’s hearing was related to Mr Manafort’s conviction last year on bank and tax charges – offences that were uncovered as part of special counsel Robert Mueller’s investigation into Russian interference in the election.

Speaking in court yesterday, Judge Ellis noted that Mr Manafort was not before the court for “anything having to do with colluding with the Russian government”. But he said that neither the 50 hours he spent speaking to the special counsel as part of the Russia investigation, nor his admittance of guilt, would not be taken into account as he considered his sentence.

Manafort showed no visible reaction as he heard the 47-month sentence. Before Judge TS Ellis III imposed the sentence, Manafort told him that “saying I feel humiliated and ashamed would be a gross understatement”. But he offered no explicit apology, something the judge noted before issuing his sentence.

Manafort’s lawyers argued that their client had engaged in what amounted to a routine tax evasion case, and cited numerous past sentences in which defendants had hidden millions from the Internal Revenue Service (IRS) and served less than a year in prison. Prosecutors said

Manafort’s conduct was egregious, but the judge ultimately agreed more with defence lawyers. “These guidelines are quite high,” Judge Ellis said.

In addition to the Virginia case, Mr Manafort faces a separate sentencing hearing next week in Washington DC. Mr Manafort pleaded guilty of two counts of conspiracy last year as part of a cooperation agreement, but he was subsequently found guilty last month of lying to prosecutors about three matters despite agreeing to cooperate. Judge Amy Berman Jackson, the judge who heard last month’s case involving Roger Stone, is also the presiding judge on the Manafort case.

Mr Manafort is one of more than 30 people charged in connection with the Russia investigation, but his case is the only one to go to trial so far.

Mr Manafort undertook lucrative work for Russian and Ukrainian oligarchs including former Ukrainian president Viktor Yanucovich for years, earnings he hid from US tax authorities, and were the subject of the Virginia case.

He was Mr Trump’s campaign manager between March and August 2016, a time period that covered Mr Trump’s selection as Republican nominee for president. But in June last year, Mr Trump sought to play down Mr Manafort’s role in the campaign.

Mr Cohen, who is due to begin a three-year prison term in May after pleading guilty to a series of offences including abuse of campaign financing laws in the Southern District of New York, claims that the Trump organisation agreed to pay his legal fees when Robert Mueller began his investigation into Russian interference in 2017. He says that the Trump organisation stopped paying those fees in June 2018 when Mr Cohen agreed to cooperate with prosecutors.

There were also reports that Mr Cohen’s lawyers discussed a possible pardon with Mr Trump’s legal team, a development that would contradict Mr Cohen’s testimony last week before the House Oversight Committee that he had never sought a pardon from the president.

Mr Cohen was back in Congress on Wednesday testifying privately before the House Intelligence Committee. He is reported to have brought with him documents that he believes shows that Mr Trump’s lawyers changed his written testimony to Congress last year in which he falsely said that discussions about a proposed Trump tower in Moscow finished in January 2016. –Additional reporting PA