Up to 750,000 jobs hinge on free trade with fifth most important trading partner, the UK 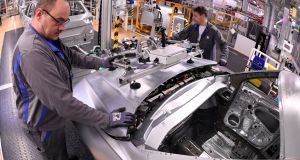 Cars on a production line at the Volkswagen plant in Wolfsburg, Germany. Some 60% of carmakers have already replaced their British suppliers due to Brexit. Photograph: Reuters

German companies are unsure what risks loom over Brexit, with every second firm braced for economic blowback from the United Kingdom’s departure from the European Union.

Three weeks before the March 29th departure date, some 41 per cent of German firms say they expect no serious consequences, while 38 per cent fear a “high” cost to their business, according to a study for the BDI industry group.

Many companies in Europe’s economic powerhouse have been preparing for Brexit, but many others are unsure for what they should be planning. Every second company, according to the survey, has no Brexit emergency plan.

The poll by Deloitte showed some 36 per cent of respondents expect a no-deal Brexit. A quarter expect the UK to leave the bloc with an agreement and another quarter of managers expect London to ask for a delay.

Only 6 per cent believe Brexit can be avoided or reversed, while 9 and 10 per cent respectively see a very low or very high Brexit risk. Just 2 per cent of firms said they would not be affected by Brexit.

The sector most concerned about Brexit appears to be Germany’s strategically important car industry, in which some 35 per cent of respondents expect Britain leaving the EU will lead to job losses. Some 60 per cent of car companies have already replaced their British suppliers.

The study delivered another clear signal: for the most German companies Brexit illustrates the need for more, not less, Europe. Some 39 per cent of respondents would like greater integration and centralisation through the EU, while 35 per cent would support further integration in selected areas such as foreign policy or migration. Just 13 per cent wish for a return of powers to member states.

Growing political and economic tensions are squeezing global trade expectations and, by extension, Germany’s economic strength as a leading exporter. The Organisation for Economic Co-operation and Development (OECD) has cut its economic forecast for Germany to 0.7 per cent growth, down from 1.6 per cent.

About 750,000 German jobs are said to depend on free trade with the UK, Germany’s fifth most important trading partner with a trade volume worth €122 billion annually.

As part of its pre-Brexit planning, Germany’s federal government has made financial provision to employ 900 more customs officials in this year’s budget. But with staff yet to be found, employed or trained, finance minister Olaf Scholz has promised new hires €100 more a month. He insisted on Thursday that German customs were well prepared for Brexit, but admitted it was hard to know how much work customs officials will face from the UK’s EU departure.

His ministerial predecessor Wolfgang Schäuble, meanwhile, has suggested Brexit may not be forever. “I think Great Britain will either not leave the EU or come back at some point,” said Dr Schäuble, the Bundestag president. “The recent developments only confirm my view.”