North Korea's state media has released a video of its leader Kim Jong-un returning to Pyongyang after visiting Hanoi for the second summit with US president Donald Trump. Video: Reuters 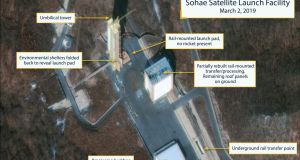 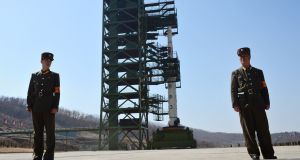 Activity has been detected at a North Korean long-range rocket site suggesting Pyongyang may be pursuing the “rapid rebuilding” of a test facility after the collapse of the Hanoi summit. Photograph: Pedro Ugarte/Getty

US president Donald Trump said he would be very disappointed in Kim Jong-un if reports are accurate that North Korea has begun rebuilding a missile test site it dismantled last year.

Mr Trump abruptly ended a summit with Mr Kim last week in Hanoi after the president said the North Korean leader asked for all US sanctions to be lifted in exchange for the dismantling of the country’s main nuclear facility. Two days later, new images from Beyond Parallel, part of the Washington-based Center for Strategic and International Studies, showed that North Korea was rebuilding a long-range rocket site at the Sohae Launch Facility.

The site was dismantled after Mr Trump’s June summit with Mr Kim in an apparent show of goodwill by Pyongyang.

US national security adviser John Bolton warned North Korea that it must be willing to completely give up its nuclear weapons programme or it could face tougher sanctions.

“If they’re not willing to do it, President Trump has been very clear they’re not getting relief from the crushing economic sanctions that have been imposed on them,” Mr Bolton told the Fox Business Network on Tuesday evening. “And we’ll look at ramping those sanctions up, in fact.”

The threat of more sanctions risks increasing tensions following the collapse of the summit, which Mr Trump said ended amicably. The US wanted more action by Pyongyang on hidden nuclear facilities, as well as warheads and intercontinental ballistic missiles that could deliver them to the American homeland.

When asked last week whether the US would strengthen sanctions on North Korea, Mr Trump said the sanctions were already strong.

“I don’t want to talk about increasing sanctions. They’re strong,” he said at a news conference in Hanoi shortly after walking away from the summit. “They have a lot of great people in North Korea that have to live also. And that’s important to me.”

Any strengthening of sanctions would have to be co-ordinated with allies and rivals in the United Nations Security Council. Speaking outside the council on Wednesday, UK envoy Karen Pierce didn’t rule out the possibility of more crippling sanctions.

“We need to find a way to get Pyongyang to make those complete, verifiable and irreversible steps,” she said. “Obviously, engagement has not yet produced the results we want. So stronger sanctions would be an obvious, hypothetical option.”

Mr Kim had said he would meet Mr Trump again to continue talks on his country’s nuclear weapons programme, and the US president also maintained an optimistic tone after the summit collapsed. Yet signs of friction are starting to emerge.

Mr Bolton said the US wouldn’t “buy the same pony that they’ve sold to previous administrations”, calling on North Korea “to go back and reassess their strategy”. Accepting Mr Kim’s offer, he said, would have “given North Korea a lifeline, giving them a chance to get their breath back economically while potentially still concealing a lot of nuclear weapons capabilities, missiles and the rest of it”.

North Korea disputed Mr Trump’s assertion that Mr Kim “wanted the sanctions lifted in their entirety,” with foreign minister Ri Yong Ho saying his country had asked only for relief from sanctions enacted in 2016 and 2017. He said that would mean removing sanctions imposed by just five of 11 UN resolutions against the country, while US officials have said it would effectively lift all the restrictions on Pyongyang except those applying directly to weapons.

Mr Bolton said on the Lou Dobbs Tonight programme that he thought Mr Kim would want to talk to Xi Jinping, the Chinese leader, before engaging with the US again. He said he didn’t believe the two leaders spoke as Mr Kim returned to North Korea.

“We’re going to see a lot of potential decisions coming out of North Korea, whether they’re serious about the talks, whether they want to get back into them and fundamentally whether they’re committed to giving up their nuclear weapons programme and everything associated with it,” Mr Bolton said.

In South Korea, a former minister who oversaw inter-Korean affairs during previous administrations blamed Mr Bolton for the breakdown of the summit.

“When it comes to the Korean peninsula issue, he is really obnoxious,” Jeong Se Hyun, a former South Korean unification minister, told ruling party lawmakers at a forum Tuesday. Mr Jeong likened Mr Bolton to “a white cavalry leader in an old Western movie who doesn’t feel guilty about killing Native Americans”, according to Korea Times.

Mr Jeong, who is part of an inter-Korean summit advisory group for the South Korean government, said Mr Bolton must have demanded that North Korea dismantle its highly enriched uranium program. “Bolton’s specialty is to abruptly move the goal post,” he said. – Bloomberg