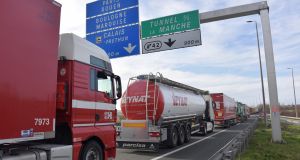 The A16 motorway between Dunkirk and Calais shows trucks heading to the Channel tunnel stuck in a traffic jam as a result of the strike. Photograph: Philippe Huguen/AFP/Getty Images

A foretaste of Brexit, say the striking French customs officers who are wreaking havoc in Calais and Dunkirk. For three days they have inspected every one of thousands of lorries crossing the English Channel, creating delays of up to two days at the ports and tunnel.

Their union threatens to continue what they call a “strike of zeal” at least until next Tuesday, when representatives are scheduled to meet budget minister Gérald Darmanin.

Seemingly endless queues of trucks are parked on motorways throughout the Calais area.

More have been forced by French police to wait in Belgium.

Páidí Toomey (63) waited patiently in the cab of his green-painted O’Neill’s lorry, several kilometres from the tunnel entrance.

Toomey left Germany with 15 tonnes of food for the UK on Wednesday, and should have arrived that evening.

“I’m supposed to be north of London by 6pm today, but I haven’t a hope,” Toomey says with surprising good humour.

“It will take another five hours to get on the train . . . There’s no point getting angry. I’m too old for that. If I get angry, I’ll still be here anyway.”

Toomey fears Brexit “will affect my company big-time, because we do a lot of work between the UK and the continent.

His voice trails off as he makes a sweeping gesture towards the queue of lorries ahead.

High-ranking French officials, from the prime minister’s office to the head of the Calais port, claim France is ready for Brexit and there will be no chaos if Britain crashes out of the EU on March 29th without a deal.

But the customs officers and lorry drivers tell a different story.

If the minister had seen us this week, it would be over. This is the only way to make them pay attention

Police occupy ramps on to the motorway, to prevent migrants stowing away in the parked lorries. An estimated 700 migrants are still sleeping rough in Calais.

“I have one eye on you and one eye on the mirror, for refugees,” Toomey says as we talk.

“I checked the roof this morning. Now they climb on the top and use power tools to cut holes while the driver is sleeping.”

“My refrigerator is broken. It’s supposed to be minus 22 degrees, but it’s minus 7,” he sighed.

“The cargo will be spoiled by the time I get to England. I was here last night, but I didn’t make it through.”

Jean-Marc Puissesseau, the president of the port of Boulogne-Calais, sat in the restaurant of the Calais port terminal, surveying a queue of lorries snaked around the port like a plaited carpet.

“Look at this!” he exclaimed. “It’s a catastrophe. This is in no way an illustration of what is going to happen in Calais port after March 29th. Absolutely not. We have been working with the UK Border Force for many months now. Fluidity is the key word in all our preparations.”

He added: “I find it deplorable that the customs officers are using Brexit as a pretext for selfish demands,” Puissesseau continues.

“It’s giving us a very bad image, and it is false . . . There will just be a few targeted checks for food imports. We’ve set aside parking spaces for that. I think an extra 40 customs officers would be sufficient. They are creating a fake problem.”

Pascaline Boubet, a representative in Calais of the Unsa Douanes trade union, which has organised the go-slow, blames the government for the inconvenience inflicted on thousands of travellers.

“If the minister had seen us this week, it would be over. This is the only way to make them pay attention.”

There are about 400 customs officers in Calais and Dunkirk. Another 100 are in training, due to be deployed at the end of the month.

But the union wants double the present level, and they want a rise in danger pay and night-time bonuses.

“We’re expected to deal with terrorists, migrants and now Brexit,” says Boubet. “We’re willing to make an effort, but the government has to give something.”

Vincent Thomazo, the secretary general of Unsa Douanes, admits the union has seized upon the March 29th deadline to make itself heard. “Brexit is a catalyst,” he says. “It has brought years of suffering by customs officers to the surface.”

Customs officers who now work normal office hours will be forced to work rotating shifts to provide 24/7 inspections, says Thomazo. The transport companies are not ready, he adds.

“They’re still using EU forms that list only the number of packages and weight, but not the contents. There may be a helluva mess on March 30th. The government says they’re ready, but they can’t say how many trucks will have their documents in order.”