UK Attorney General Geoffrey Cox has said he intends to look inside the Brexit 'codpiece' to ensure it's in working order as the latests talks on the backstop resume. Video: Parliamentlive.tv 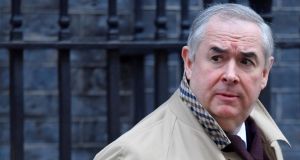 Geoffrey Cox was back in the House of Commons on Thursday for a mid-morning performance that owed as much to his am-dram experience in the Cambridge Footlights as to his years at the Old Bailey.

The attorney general had little to boast about after a disastrous dinner in Brussels with Michel Barnier’s negotiating team, which left EU officials dismissing Britain’s latest proposals as “insane”.

But Cox was in crowd-pleasing form, making a virtue of a disparaging term used by hardline Brexiteers to describe the concession he was seeking so that he could change his legal advice on the Northern Ireland backstop.

“It is government policy to achieve the necessary change in the backstop that will cause me to review and change my advice. That is government policy; that is the subject of the discussions that we are having. I would say that it has come to be called ‘Cox’s codpiece’. What I am concerned to ensure is that what is inside the codpiece is in full working order,” he said.

If May wins a majority for an amendment outlining Cox’s arbitration proposal, she will still have to face votes on a no-deal Brexit and an extension

Theresa May’s hopes of winning a majority for her Brexit deal next Tuesday rest on persuading the DUP and hardline Conservative Brexiteers that Britain cannot be trapped indefinitely in the backstop.

Downing Street perceives the DUP as the key to unlocking the support of all but a handful of diehard eurosceptics on the Conservative backbenches.

The EU has ruled out a time limit or a unilateral withdrawal mechanism and Cox’s efforts are now focused on an arbitration mechanism to determine when the backstop can end.

DUP Brexit spokesman Sammy Wilson told the Northern Ireland Affairs Committee on Wednesday that arbitration was unacceptable and that only Britain’s sovereign parliament and government should be allowed to determine how long the backstop lasts.

Others in his party believe that arbitration could offer a way out of the backstop but that its effectiveness depends, as Cox told MPs on Thursday, on the question the arbitrator is asked.

Cox told EU negotiators this week that instead of determining if both parties are acting in good faith, arbitrators should be asked if Britain had made reasonable efforts to find an alternative to the backstop.

If the answer was yes, Britain should be allowed to replace the backstop – which would see the whole of the UK remain in a customs arrangement with the EU and Northern Ireland following some single market rules – with a “mini-backstop” that would seek to minimise friction on the Border.

Cox will return to Brussels on Friday for talks that are expected to continue through the weekend. But the two sides are so far apart that it now appears unlikely that the attorney general will secure the changes he needs to change his legal advice and persuade the DUP to vote for the Brexit deal.

The prime minister has promised to bring the deal back to the Commons by next Tuesday for a “meaningful vote” and that its defeat would be followed on Wednesday and Thursday by votes on a no-deal Brexit and an extension to the article 50 negotiating period.

If a defeat on Tuesday is unavoidable, the government could offer MPs an additional vote similar to January’s Brady amendment which said the House would support the withdrawal agreement if the backstop was replaced with alternative arrangements to keep the Border open.

If May wins a majority for an amendment outlining Cox’s arbitration proposal, she will still have to face votes on a no-deal Brexit and an extension. But she will have reduced further the price of Brexiteer support for her deal and demonstrated to the EU that such a concession would win a majority at Westminster.

The prospect of delaying Brexit has weakened the incentive to compromise on all sides at Westminster as each faction believes that extra time gives their preferred option a better chance of success.

A delay could allow backbench MPs to take control of the Brexit process as they seek to build a cross-party consensus behind a softer Brexit.

Such an outcome, which could see Britain remaining in both the single market and the customs union, is a nightmare for Conservative Brexiteers.

The DUP are relaxed about a delay, pointing out that the only form of Brexit that presents a real threat to unionism is May’s deal with the backstop in its current form.

From a strictly unionist point of view all other options, including remaining in the EU, are acceptable.