Withdrawal of US funding to Palestinians could harm Israel itself 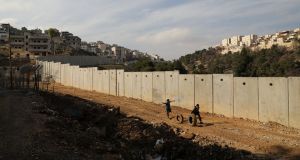 Donald Trump’s threat to cut funding to the Palestinians would deprive destitute Palestinians in the occupied territories of essential services and could destabilise countries where Palestinian refugees live.

The US is the largest donor to Palestinian welfare. Since the signing of the 1993 accord that launched the Palestinian-Israeli peace process, the US has averaged payments of $400 million a year, most for investment in development projects undertaken by the US international development agency, USAid.

If funding is cut, Israel, as the occupying power, could find itself compelled to fund Palestinian hospitals in East Jerusalem, water projects and vaccination programmes hitherto backed by USAid.

Last year, $36 million was given to the Palestinian Authority for US-trained Palestinian security forces, which co-operate with Israeli counterparts to prevent attacks on Israelis and maintain order in the West Bank.

It's not only Pakistan that we pay billions of dollars to for nothing, but also many other countries, and others. As an example, we pay the Palestinians HUNDRED OF MILLIONS OF DOLLARS a year and get no appreciation or respect. They don’t even want to negotiate a long overdue...

...peace treaty with Israel. We have taken Jerusalem, the toughest part of the negotiation, off the table, but Israel, for that, would have had to pay more. But with the Palestinians no longer willing to talk peace, why should we make any of these massive future payments to them?

US denial of this funding would harm Israel and relieve the authority of the job of helping to ensure security for Israeli settlers in the West Bank and East Jeru- salem, for which the authority is condemned by Palestinians.

Without Palestinian intelligence agencies and policemen, a third, organised intifada – instead of individual attacks on Israelis – could erupt in the West Bank and East Jerusalem.

A reliable level of funding was meant to sustain the peace process until a negotiated settlement could be achieved and a Palestinian state emerged. This has not happened, but through these programmes the US contributed to stability in the volatile Palestinian territories.

Halting $368 million in US funding to Unrwa, the UN agency looking after five million Palestinian refugees, would be a major blow to the agency’s services at a time when the region is in turmoil.

Withholding the US contribution, which amounts to 30 per cent of the Unrwa budget, would force a drastic reduction in services. Education would be the main area for cuts.

As Palestinians see education as their only route to a decent future, this would prompt mass protests by Palestinians living in Israeli-occupied Gaza, the West Bank and East Jerusalem, as well as among Palestinian refugees dwelling in Jordan, Lebanon and Syria.

For more than six decades Unrwa has been regarded as a major stabilising factor in the area. Israel receives $3.5 billion in annual aid from Washington.