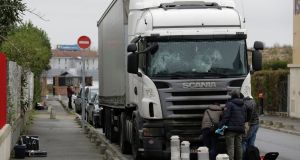 Police investigators look for evidence around a damaged truck whose windshield was smashed, on January 2nd in the Paris suburb of Champigny-sur-Marne. Photograph: Thomas Samson/AFP/Getty Images

Police demonstrated across France and interior minister Gérard Collomb called for “in-depth reforms” to change the immigrant banlieues on Tuesday after violent attacks against police in Paris suburbs on New Year’s Eve and New Year’s Day.

Media and politicians used the word “lynched” to describe the attack on a police captain and his female driver overnight from Sunday to Monday, in Champigny-sur-Marne, southeast of Paris.

In shocking video footage that caused outrage, a young woman with red hair in a ponytail is seen curled up on the ground and screaming while some 20 youths kick her and stomp on her. She tries to protect her head with her hands. Her body is shoved back and forth like a rag doll.

“Someone in the crowd was shouting ‘Beat them up! There are two of them. Take their weapons!’,” Ali, a 17-year-old schoolgirl, told BFM-TV. When he helped the woman get up, “She couldn’t talk. She was bleeding from the mouth. She hobbled on one leg.”

The video “was displayed like a trophy on social networks, and you see a lot of young people standing around laughing while this young policewoman is being lynched”, Yoann Maras, a local official, told BFM-TV. He denounced the “impunity” of the attackers.

Another video shows a crowd overturning the police car in which the two police officers arrived and setting fire to it as onlookers cheer.

Vehicles belonging to the fire brigade and civil defence were vandalised in the same riot. More than 250 cars were burned in the Paris region on Sunday night, about 30 more than the previous year.

President Emmanuel Macron promised on Twitter that “Those guilty of the cowardly and criminal lynching of police doing their duty on the night of December 31st will be found and punished”.

The police captain suffered a broken nose, a cut on his eye and severe bruising. Doctors ordered that he be taken off duty for 10 days. He fired a tear gas grenade at the beginning of the attack. Witnesses said he took his service weapon out of its holster but did not shoot it. The female officer was given a week to recover. She has asked the authorities to “erase” the videos circulating on social media.

On Monday two more police were attacked in the “3000” housing estate in Aulnay-sous-Bois, north of Paris, when they tried to detain a youth on a scooter they suspected was stolen. One suffered a head concussion and a sprained wrist and was taken off duty for eight days. The other fired in the air “to calm things down”, according to Le Monde.

Interior minister Gérard Collomb told Europe 1 radio that “this society of violence cannot continue” and that France must break “the vicious circle” in these banlieues.

The police captain and female officer had responded to an emergency call after dozens of youths were turned away from a private party and fighting broke out in the street in Champigny.

Frédéric Lagache, the deputy head of the leading French police union Alliance, told France Info radio that “fear must shift to the side of the thugs, not be on the police side”. He said five policemen and women were injured in attacks every day. His union is demanding the re-establishment of mandatory sentencing for violence against police. “Most of the time, those arrested are let go” by judges, he said.

The far right Front National issued a communique denouncing “insecurity bordering on urban guerrilla warfare”. The anti-immigration party demanded that all security forces “be assumed to be engaged in legitimate self-defence”.

Trump says Covid-19 will disappear after US reports record increase 06:54
Leicester lockdown could be just the start if tracing system not improved – Labour 22:30
Trumps to travel to South Dakota for July 4th despite rise in US coronavirus cases 20:33
World takes stock of Covid-19 drug after US snaps up supplies 20:24
Netanyahu misses target date for annexation of Palestinian territories 19:45

1 Bobby Storey: The IRA's planner and enforcer who stayed in the shadows
2 Full line up of junior ministers unveiled as Taoiseach accused by one TD of snub
3 Open Ireland as soon as possible - Tourism chief warns of 'catastrophic' impact of pandemic
4 Who are the new junior ministers? All their profiles are here
5 Leaders spark anger as they look west for junior minister carve-up
Real news has value SUBSCRIBE