Two demonstrators are shot dead amid unrest over economy and corruption

The US says 'the world is watching' how Iranian authorities respond to anti-government protests. Videos obtained by Reuters showed police firing water cannons at protesters who had gathered in the Kermanshah's main square. Video: Reuters 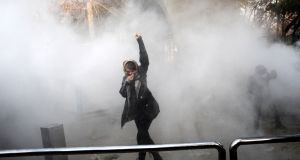 A woman raises her fist amid tear gas at the University of Tehran during a protest on December 30th, 2017. Photograph: STR/AFP/Getty Images

Protesters in Iran who have staged three days of demonstrations over economic hardship and alleged corruption should pay a high price if they break the law, the government said on Sunday.

The wave of anti-government demonstrations in several cities are the biggest challenge to Iran’s leaders since unrest in 2009 that followed the disputed re-election of then-President Mahmoud Ahmadinejad went on for months.

Police in Tehran fired water cannon on Sunday to try to disperse demonstrators gathering in Ferdowsi Square in the centre of the capital, according to video footage posted on social media. Video posted online also showed a clash between protesters and police in the city of Khoramdareh in Zanjan province in the country’s northwest. There were also reports of protests in Sanandaj and Kermanshah cities in western Iran.

Two protesters were shot dead in the western town of Dorud on Saturday night. The deputy governor of Lorestan province blamed foreign agents for the deaths.

“No shots were fired by the police and security forces. We have found evidence of enemies of the revolution, Takfiri groups and foreign agents in this clash,” Habibollah Khojastehpour said in an interview on state television on Sunday. Takfiri is a term for Sunni militants especially the Islamic State.

State media also quoted Interior Minister Abdolreza Rahmani Fazli as saying: “Those who damage public property, violate law and order and create unrest are responsible for their actions and should pay the price.”

Brig-Gen Esmail Kowsari, the Revolutionary Guards’ deputy security chief in Tehran, said the situation in the capital was under control and warned protesters would face “the nation’s iron fist” if unrest persisted.

“If people came into the streets over high prices, they should not have chanted those (anti-government) slogans and burned public property and cars,” he said.

Ahmad Khatami, a hardline cleric who leads Friday prayers in the capital Tehran, said the protests were similar to those in 2009 over alleged electoral fraud.

He called for capital punishment for those chanting slogans against the values of the Islamic Republic.

The protests have included chants and slogans against Supreme Leader Ayatollah Ali Khamenei and the clerical leadership in power since 1979 revolution.

Protests defied the police and Revolutionary Guards who have used violence to crush previous unrest because they are motivated by economic grievances and have no clear leader.

They are also difficult for the government of President Hassan Rouhani because he was elected on a promise to guarantee rights to freedom of expression and assembly.

Mr Rouhani’s main achievement, a 2015 deal with world powers that curbed Iran’s nuclear program in return for a lifting of most international sanctions, is yet to bring the economic benefits the government promised.

Unemployment rose to 12.4 per cent this fiscal year up 1.4 percentage points, according to the Statistical Centre of Iran.

Saturday’s protests coincided with state-sponsored rallies staged across the Islamic Republic to mark the final suppression of the 2009 unrest by security forces, with mass pro-government events in Tehran and Mashhad, Iran’s second city. –Reuters