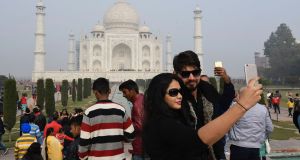 Visitors take selfies in front of the Taj Mahal in Agra, India, today. India is to restrict the number of daily visitors to the 17th century monument in an effort to preserve it. Photograph: Dominique Faget/AFP/Getty Images

Authorities in charge of the Taj Mahal have decided to cap the number of local visitors to the 17th century monument at 40,000 per day, for environmental reasons and to prevent stampede-like situations that occur frequently across India wherever large crowds congregate.

The Archeological Survey of India (ASI), which supervises the white marble mausoleum built by a Mughal emperor for his dead wife at Agra, 233km southeast of New Delhi, has however imposed no limit on the number of foreign tourists visiting the Taj.

The restriction on the entry of Indians to the Taj comes into effect from January 20th and is expected to help the ASI better maintain the vast riverside complex that is usually littered with garbage left behind by visitors.

Another crowd management measure under ASI consideration is limiting visitors’ stay inside the vast Taj complex to three hours, as opposed to the entire day many choose to spend inside it, picnicking and sunning themselves during winter in its lush Mughal gardens.

According to the ASI an average of 35,000 people visit the Taj daily, but this number more than doubles at the weekend and on holidays, often topping some 75,000 people.

Its officials maintain that such large crowds are problematic, especially at the Taj’s narrow entry gates. They say limiting local visitors to 40,000 each day of the week would bring the crowding to “manageable limits”.

Separately, the ASI is continuing to battle a group of Hindu lawyers at Agra District Court who claim the Taj, built by emperor Shah Jahan in memory of his wife Mumtaz Mahal, was in reality a Hindu temple.

The six petitioners, who filed their case in April 2015, claim the world heritage site was built on a temple dedicated to Shiva, the Hindu god of destruction, and that the resplendent Taj’s original name was Tejo Mahalaya.

They are also demanding that Shiva’s followers be allowed perform puja or prayers and conduct aarti, a Hindu ritual in which light from wicks soaked in butter are offered to the deity. At present, Muslims are allowed to offer prayer at the Taj complex, which includes a mosque.

Historians have objected to what they describe as the Hindu nationalists’ distortions of history. “There should not be a problem with multiple perspectives,” said Prof Aditya Mukherjee of Jawaharlal Nehru University in New Delhi. Imagination cannot be treated as history, he added.

“The person who made the Taj Mahal targeted India’s Hindus, and if these people still find place in local history, I guarantee that history will be changed,” said Sangeet Som, a legislator from northern Uttar Pradesh state, where the Taj is located.

Speaking in October at a public function at Meerut, 82km north of New Delhi, he declared the Taj was the “work of traitors”.