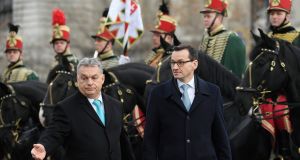 New Polish prime minister Mateusz Morawiecki (right) and his Hungarian counterpart Viktor Orban at a welcoming ceremony for the former in front of the Parliament building in Budapest, Hungary, today. Mr Morawiecki is on an official visit to Hungary. Photograph: Tamas Kovacs/EPA

Hungary and Poland have urged the European Union not to interfere in their affairs and demanded a strong role for their region in shaping the future of the bloc.

EU officials accuse the populist right-wing governments in both countries of eroding democracy and the rule of law by tightening political control over the judiciary, media, civil society groups and other formerly independent institutions.

The disputes have prompted calls in some member states for future EU funding to be tied to each recipient’s adherence to democratic standards, fuelling fear in Poland and Hungary that they could lose billions of euro.

“Today there are successful countries in central Europe, countries which add to the EU’s strength. We add more than anyone thought back in 2004 when these countries joined the union,” Mr Orban said, lauding economic growth in Poland and Hungary.

Vision of the future

“We want to have a strong say, as these countries have a vision about the future of Europe,” he added.

“If you want a strong Europe, it can only be with strong members. Weak member states also make for a weaker Europe . . . We don’t want to live in an empire. For us, the European Union is still an alliance of free European nations.”

The EU is taking Poland, Hungary and the Czech Republic to court for refusing to accept mostly Muslim refugees under a quota scheme that the three states say endangers Europe’s security and identity.

“In terms of migration and quotas that were to be imposed on member countries, we strongly reject such an approach as it infringes on sovereign decisions of member states,” Mr Morawiecki said.

“The EU’s immigration policy is not working . . . it has failed spectacularly,” Mr Orban added.

“It is clear that the European people don’t want immigration, while several European leaders are still pushing the failed immigration policy.”

Mr Orban has pledged to use Hungary’s right of veto to shield Poland from EU punishment, after Brussels launched unprecedented disciplinary proceedings against Mr Morawiecki’s government over sweeping reform of his country’s law courts.

Neither leader mentioned the issue on Wednesday, but Mr Orban said 2018 would be a “year of great battles” with unnamed western states that he claimed want to move Europe into a “post-Christian and post-national era”.

“Democracy was restored in Austria because people who don’t want immigration voted for a party that does not want immigration either,” Mr Orban said of recent elections that brought a conservative-far right coalition to power in Hungary’s neighbour.

“The same thing will happen everywhere in Europe . . . it’s just a matter of time,” added Mr Orban, who will host Taoiseach Leo Varadkar on Thursday.