What legacy does Netanyahu leave as Israel’s longest-serving PM? 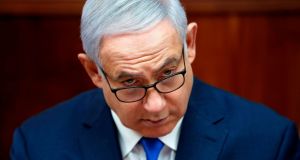 Israeli prime minister Binyamin Netanyahu: Asked how he would like to be remembered, he responded: “Defender of Israel, liberator of its economy.” Photograph: Ronen Zvulun/AFP/Getty

Netanyahu’s first term in office lasted three years. He became Israel’s youngest leader when he was elected prime minister in 1996, aged 46. He served until 1999, returning to office 10 years later, in March 2009. He is the only prime minister in Israel to have been elected three times in a row.

Netanyahu is also one of the longest-serving heads of the OECD countries, with only Turkish president Recep Tayyip Erdogan and German chancellor Angela Merkel having led their countries for a longer period.

However, whereas David Ben-Gurion’s legacy is etched in history as Israel’s legendary founding father who oversaw the mass influx of Holocaust survivors and Jews from Arabic-speaking countries and established Israel as a regional power, Netanyahu’s place in history may depend on what happens in the coming months.

Israel’s pre-eminent politician of the modern era, and considered almost invincible politically until a few months ago, “Bibi” currently leads a transitional government until the September 17th elections, having failed to cobble together a coalition following the Knesset vote in April.

And, according to the latest polls, he will find it difficult to muster a working majority in September, based on his Likud party’s natural allies of smaller right-wing and religious parties.

There is a distinct possibility that his illustrious career, during which he has successfully established himself as a major player on the world stage, will end with a protracted legal battle in court as he fights to prove his innocence, even though he can theoretically stay on as prime minister until a possible conviction.

He insists the allegations are part of a left-wing conspiracy, supported by a hostile media and judiciary, to bring him down. “People by and large, my supporters, have been, if anything, energised by it,” he says.

Netanyahu likes to compare himself to Israel’s first prime minister.

“Ben-Gurion did not have illusions and I too have no illusions. Like Ben-Gurion, we want peace, but when our choice is between living by the sword and living with a Muslim sword on our neck, we choose the first option,” he said in a 2015 speech.

Speaking in 2018, he explained the difference – as he saw it – between himself and Ben-Gurion. “Two generations have passed. Israel is strong, flourishing, a regional power, a secret support for Arab regimes. Ben-Gurion prophesied, but did not know what he was prophesising. Today we are far beyond that.”

Tom Segev, an Israeli historian who wrote a best-selling biography of Ben-Gurion, A State at All Costs, notes that both leaders adopted a policy of “maximum territory and minimum Arabs”, but both were wary of annexing occupied territory. Neither believed that the Israeli-Palestinian conflict could be resolved, only managed.

In fact, Netanyahu’s opponents accuse him of eroding Israel’s democratic institutions and aligning with the extreme right in order to stay in power.

Protesters in Tel Aviv against legislative efforts to grant the prime minister immunity from prosecution and limit the powers of the supreme court wore Turkish-style fez headgear to illustrate that Israel under Netanyahu increasingly resembles Turkey under Erdogan.

Announcing his return to politics as he formed a new party last month, one of Netanyahu’s fiercest critics, former prime minister Ehud Barak, said his aim was to end Netanyahu’s “corrupt” rule.

“Netanyahu has reached the end of his political career. The Netanyahu regime must be toppled. I’ve known you for 50 years . . . it’s the end of the road for you,” said Barak, addressing Netanyahu, whom he once commanded in an elite army unit. “Bibi, this is your last chance to go home of your own volition,” he declared.

“We have a leader who fights only one campaign – the campaign for his own political survival,” Dagan said. “In the name of this war, he is dragging us down to a binational state and to the end of the Zionist dream.”

Asked how he would like to be remembered, Netanyahu responded: “Defender of Israel, liberator of its economy.”

With Israel’s occupation of the West Bank now in its 53rd year and surrounded by the chaos of the Arab Spring and an ever-belligerent Iran, Israeli public opinion during the reign of Netanyahu has shifted sharply to the right.

It may be a permanent shift and this could be Bibi’s lasting legacy, even if his legal troubles bring an end his political career.