EU-UK withdrawal agreement not up for renegotiation, German chancellor insists 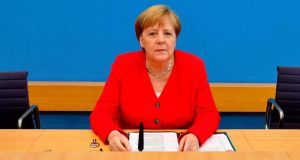 Chancellor Angela Merkel has called for fresh, creative thinking on the UK’s future relationship with the European Union after Brexit to “square the circle” on the Irish border and obviate the need for a backstop.

Before heading off on her summer holidays, the German leader flagged the prospect of more time for London but insisted that the UK-EU withdrawal agreement is not up for negotiation.

But she suggested that the solution to the present EU-UK standoff over the backstop lay less in the present than in the future.

Building on signals in recent months, Dr Merkel proposed calming British fears of being trapped in a post-Brexit limbo by sketching out in greater detail the possibilities of a future relationship. Her pre-holiday homework to Dublin, London and Brussels: devise new supplementary proposals on the medium-term future to prevent a no-deal Brexit in the immediate future, on October 31.

“The task is to draft future relations that way and perhaps to draft them more specifically and better and more succinctly than we have managed to date,” she said.

Opposition to the backstop, she pointed out, lay behind Westminster’s triple rejection of Theresa May’s withdrawal agreement deal – forcing her resignation.

“The moment that a solution for the management of the Border is found in [the declaration on] the future relationship . . . then the backstop will be overwritten, so to speak,” she said.

She refused to speculate on working with Boris Johnson, should he succeed Mrs May, nor would she be drawn on whether she favours another British referendum on EU membership.

“I trust very firmly that Britain will find its way,” she said. “It is a proud, great nation and it will remain our partner even if Britain is no longer a member of the European Union.”

The German leader heads off on her summer break after a particularly gruelling year and speculation about her health, following three recent trembling spells in public.

Quizzed by journalists, she said she understood questions about her health – but offered no answers apart from insisting she was “able to fulfil my function”.

“As a person I have a great interest in my health,” she said, adding that she hoped for “a further life” after she leaves politics – 2021 at the latest.

Batting off questions with the effortless skill of a tennis professional, Dr Merkel said the character traits most essential to her since entering in the chancellery in 2005 were “optimistic realism . . . joy . . . openness to judge new situations”.

Was President Donald Trump one such situation?

She distanced herself from Mr Trump’s suggestion that four women politicians of colour, three born in the United States, should “go back” to their homeland.

“I . . . stand in solidarity with the women who were attacked,” she said. Such attacks on diversity “undermine America’s strength [which] lies exactly in the fact that people of very different nationalities contributing to the strength of the American people”.

With characteristic modesty, she described her last working week as “eventful”: waving her defence minister off into the European Commission presidency to replace her in Berlin with a close political confidante, Christian Democratic Union (CDU) leader Annegret Kramp-Karrenbauer, thereby boosting her succession chances.