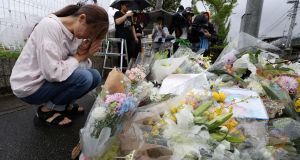 A woman prays outside the Kyoto Animation building on Friday. News reports say a 41-year-old man, who allegedly set fire to the building while shouting ‘die’, has been detained. Photograph: EPA

Animation fans gathered at the site of Japan’s worst mass killing in 18 years on Friday, laying flowers and offering prayers for the 33 people killed in an arson attack on an animation studio.

A man had on Thursday shouted “die”, and that he had been plagiarised, before pouring what appeared to be petrol in the three-storey studio of Kyoto Animation and setting it ablaze.

On Friday, mourners gathered in the rain at the edge of a police cordon around the charred building.

“It’s hard to put into words how I feel,” said animation fan Yuichi Kumami (27), who had taken time off work at his company in nearby Osaka to lay flowers at the site.

“They may not be able to produce the same kind of works again and it was my hope that there would be more memorable works in the future, but that may be impossible now and that is very saddening,” he said, his voice cracking with emotion.

A pillar of Japanese pop culture, animation has become a major cultural export, winning fans around the world.

Kyoto Animation has an outsized role in the industry, with its influence outstripping the list of works it has produced.

Police on Thursday detained a 41-year-old man who had been seen pouring what appeared to be petrol at the building, public broadcaster NHK reported. The local chief of police, Hideto Ueda, visited the building and laid flowers at the entrance before going inside.

“It is a tragedy that so many people lost their lives in that small space,” he said.

Kazuko Yoshida (78) said she lived close to the site and had smelt smoke on Thursday. From her second-floor window, she saw smoke and helicopters.

“I wonder why the company was targeted, why those people had to be caught up in this. It sounds like the man who did it wanted to die,” she said.

“If he wanted to die he should have died alone – why did he have to involve other people? He is a terrible person.”

An American fan of Kyoto Animation, Blake Henderson(26) from Alabama, heard about attack while on a visit to Kyoto and came to pay his respects.

“I love fighting games, all things about Japan, ” said Henderson, who wants to work in Japan as an English teacher. “I love Japan so much and this one incident won’t change my entire perspective on Japan, but it still hurts.”

One 23-year-old university student paid his respects before going to his lessons. He said he was a fan of “anime”, as Japanese animation is known.

“You hear about gun killings overseas, but anyone can get their hands on gasoline and that is pretty frightening,” he said. “You can’t stop people from buying gasoline – perhaps there’s a way to offer help to people who might be tempted to commit crimes.”

One elderly man passing by on his bicycle said the building did not appear to have a fire escape. “I think that was a big reason why so many people died,” he said. – Reuters