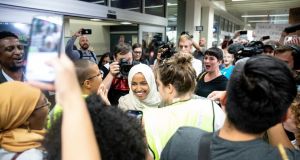 US president Donald Trump renewed his attacks on Democratic congresswoman Ihlan Omar on Friday, a day after attempting to distance himself from chants of “send her back!” at a campaign rally earlier in the week.

Speaking in the Oval Office, Mr Trump praised those who attended his rally in North Carolina.

Washington has been dominated this week by Mr Trump’s controversial attacks on four non-white members of Congress, including Ms Omar, which began last weekend when he said they should “go back” to the “totally broken and crime infested places from which they came”.

Three of the four congresswoman targeted by Mr Trump were born in the US, while Ms Omar moved from Somalia when she was 12. All four are American citizens.

....State which I will win in #2020 because they can’t stand her and her hatred of our Country, and they appreciate all that I have done for them (opening up mining and MUCH more) which has led to the best employment & economic year in Minnesota’s long and beautiful history!

Earlier on Friday the president denounced Ms Omar as “foul-mouthed” and claimed that a crowd who gathered in Minnesota to welcome her home on Thursday with chants of “welcome home Ihlan” was “staged”.

“It is amazing how the Fake News Media became ‘crazed’ over the chant ‘send her back’ by a packed Arena (a record) crowd in the Great State of North Carolina, but is totally calm & accepting of the most vile and disgusting statements made by the three Radical Left Congresswomen,” he tweeted.

He went on to criticise the media for covering “a tiny staged crowd as they greeted Foul Mouthed Omar in Minnesota”. Ms Omar was greeted by supporters as she arrived back in Minneapolis on Thursday night from Washington, following a week of attacks from Mr Trump.

“Mainstream Media, which has lost all credibility, has either officially or unofficially become a part of the Radical Left Democrat Party,” Mr Trump wrote. “It is a sick partnership, so pathetic to watch!”

The president also touted his popularity in Ms Omar’s home state of Minnesota, predicting that he will win the state in next year’s presidential election “because they can’t stand her and her hatred of our Country, and they appreciate all that I have done for them (opening up mining and MUCH more) which has led to the best employment & economic year in Minnesota’s long and beautiful history!”

As she arrived at the airport, Ms Omar said that Mr Trump was threatened “because we are inspiring people to dream about a country that recognizes their dignity and humanity”.

Later at a meeting on healthcare in a Minnesota community centre, Ms Omar said, “It’s good to be home”.

“I know there are a lot of people that are trying to distract us now. But I want you all to know that we are not going to let them... You all send me to Washington to do the important work of progressing our country,” she said.

Following criticism by Mr Trump of Ms Omar at his campaign rally in Greenville, North Carolina on Wednesday night, the crowd began to chant “send her back, send her back”.

But after appeals by senior Republicans, and reportedly his daughter Ivanka, Mr Trump sought to disavow the chants on Thursday.

“I was not happy when I heard that chant,” he told the reporters in the White House. “I felt a little bit badly about it… it started up rather fast... I was not happy with it… but again, I didn’t say that but they did.” Asked by a reporter why he didn’t intervene to stop the chanting, he said that he tried to do so by beginning to talk quickly.