America Letter: A Sunday service in Washington offers food for thought on life in the US 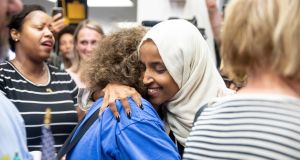 US Democratic Congresswoman Ilhan Omar, a target of the racially divisive rhetoric emanating from the White House this week, is greeted by supporters in Minneapolis on Thursday. Photograph: Jenn Ackerman/New York Times

Perched on high ground overlooking Washington stands the Washington National Cathedral. Its huge hulking shape is a distinctive presence on the capital’s skyline. Over the years it has witnessed significant events of American political history – from the funeral of Eisenhower to national prayer services marking the inauguration of presidents. More recently it hosted the funerals of John McCain and George HW Bush.

Last Sunday, the choir of Christ Church Cathedral, Dublin, was invited to the cathedral on the first stop of their current US tour.

As in many US churches, the service had that injection of all-American energy, as the celebrants encouraged participation and forceful congregational singing, the general air of bustle enhanced by the presence of several babies for a Baptism.

At 10am, the choir, accompanied by cathedral dean Dermot Dunne, opened with a piece by English composer Michael Tippett.

For 90 minutes, the congregation – the usual mix of the faithful, tourists and visiting faith groups – were lost in the music and communality.

It was easy to sit quietly, and forget about the outside world. To forget about the immigrant raids that were about to commence that same morning in cities across the United States. To forget about the incendiary tweets fired off by the US president minutes earlier a few miles away at the White House before he headed to play golf, those tweets in which he told four non-white female members of Congress to “go back” to the countries they came from.

It was not clear if Rev Dana Colley Corsello had seen the headlines before she headed out to church on Sunday, but as she began to speak, that outside world came sharply back into view.

Reminding us that the Gospel reading that morning was the story of the Good Samaritan, she opened with a funny, human anecdote about her own experience of a stranger’s good deed during a family holiday.

But the real point of the Gospel parable, she said, was that the Samaritan who comes to the aid of the injured man hailed from a tribe despised by Jews at the time.

“To put it in contemporary language, the Samaritan was the other, the heretic, the object of fear, condescension, disgust, and judgment,” she explained. As a result, the choice to make him the hero of the story was scandalous.

The parable, she said, makes us ask: “Who are we programmed to hate, to fear, to loathe?

“Our political climate is dividing us from people we don’t even know through projections of fear . . . caravans of migrants seeking asylum, invaders who are always dark-skinned or Muslim, or transgendered people, pro-lifers, pro-choicers, whoever it is who threatens our status quo.”

As she continued, she pressed ahead with the parallels to today’s America.

By asking us to question entrenched categories, to consider the possibility “that a person might add up to more than the sum of her political, cultural or racial identities”, the story of the Good Samaritan has lessons for today, she said.

Recalling a conversation she had with a member of the Trump administration, she said she was concerned about his comments about the upcoming election. “It’s going to be ugly, real ugly. The goal is not to unify but to win.”

As she concluded her sermon, the familiar rhythms and rituals of the service returned, but the atmosphere had changed subtly. The realities of this intensely politically divided nation had intruded upon this seemingly safe Sunday morning space.

At the back of the nave, young parents and godparents gathered at the water font holding their babies. Amidst the din of infant squeals and nervous giggles of their parents, the babies were baptised. The pantheon of names as each baby was introduced seemed like an ode to America’s diversity, a reminder that this country has always been built on cultural, ethnic and religious difference.