“I wanted to help your husband but I was afraid.” 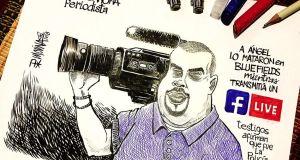 Angel Gahona, journalist, was allegedly killed by a police sniper in Bluefields as he live streamed during an anti-government protest. Drawing: Pedro Molina, April 2018

Iris Parrales begged her son Noel to abandon the student occupation at the Polytechnic University of Managua (Upoli) in May 2018, fearing for his life. Police and paramilitaries patrolled outside, detaining anyone caught leaving the campus.

Unable to dissuade her son, Iris joined him instead, bringing water and fresh clothes each evening. On May 16th, Iris was gripped by an ominous feeling and asked her husband, Humberto, to bring Noel home.

Father and son were last seen leaving the Upoli campus on a motorbike. Witnesses later described how the two men were intercepted and forced off the road. Hours later their bodies were discovered, bearing signs of torture. The Parrales family pursued a number of leads and met a further witness, a taxi driver, who believed he had witnessed a traffic incident rather than a violent assault.

“I feel terrible about this,” the witness told Iris, “I wanted to help your husband but I was afraid.” He has since agreed to testify should a case proceed.

Iris was offered financial aid in return for withdrawing accusations against state security forces but she refused. Relatives of the two men who investigated the incident have since fled to Costa Rica after one of them narrowly escaped a paramilitary ambush.

“Nothing will ever be the same again,” Iris told me, sitting in the bedroom of her small home in a working class district of Managua. “Noel was studying to be a vet, he loved nature and had no hatred in him.”

Angel Gahona, an independent journalist, was based in Bluefields on Nicaragua’s Atlantic Coast. Gahona and his partner, Migueliuth Sandoval, had a daily news programme on local TV but were forced off air by state censors when they refused to stop broadcasting footage of the growing protests.

On April 21st Gahona was struck by a single bullet as he approached city hall, dying instantly. “Angel was a stone in the shoe for this government,” Amanda Gahona, his mother, told me. “He had just received death threats and was thinking of leaving for Costa Rica.”

Brandon Lovo and Glen Slate, two local youths who participated in the protests, were arrested and charged with the killing. “We know they didn’t do it,” added Amanda. “They were framed.”

The presiding judge, an Ortega appointee, heard prosecuting evidence from dozens of police but a lone eyewitness called by the defence was dismissed by the judge as a liar, his testimony removed from the record. That witness has since gone into exile, along with the defence lawyer, warned that she would have to “face up to the consequences” if she continued to appeal the case.

Gahona’s parents left Nicaragua when armed vehicles began to appear outside their home. Slate and Lovo were released from jail last month, beneficiaries of a government amnesty which wiped the slate of all investigations into the violence.

Javier Munguía (19) left home on May 8th, 2018. He never returned. “A whole new life began for me; a life of suffering, sadness and pain,” his mother, Margarita, told me.

On May 11th, Margarita received a call from a former prisoner who told her he had shared a cell with her son. In the days that followed, Margarita camped outside Managua’s Chipote prison and sought legal help from human rights lawyers.

On May 18th, Margarita received a call from the morgue, asking her to identify and collect her son’s body. The deputy director informed her that Javier had died of natural causes 10 days earlier, “probably caused by a fright or a fall from a moving car”.

When Margarita checked the morgue register she noticed that Javier’s name had been added to the margin at the top of a page in which all other entries had been neatly written down in order of arrival. “The death was violent,” concluded an independent pathologist.

On May 21st police called a press conference to announce the results of their investigation, hours before international experts published their findings, detailing dozens of state-sponsored killings, among them that of Javier Munguía.

Police claimed that Javier attempted to rob a group of students, armed with a pistol. The students overpowered him and wrestled him to the ground, where he hit his head and died. The killing was a case of self-defence, said the authorities, requiring no criminal investigation.