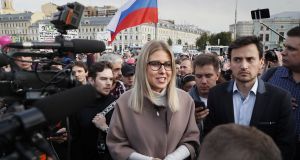 Russian opposition activists will lead a demonstration in Moscow on Saturday to protest at their exclusion from an election for the city legislature planned for early September.

Moscow’s election commission has barred all serious opposition candidates from the poll on technical grounds, clearing the way for Kremlin loyalists to bag the majority of the 45 seats in the Moscow City Duma, or parliament.

The release this week of the final list of candidates has sparked outrage in the Russian capital, with hundreds of people attending rallies every evening to demand the right to choose their political representatives.

Russian opposition leaders plan to lead a far larger protest on Saturday to force election officials to make concessions. “Our authorities will only change things and concede if people turn out on the streets,” said Russian opposition leader and anti-corruption crusader Alexei Navalny. Vladimir “Putin has been in power for 20 years and these 20 years have convinced us that nothing else works”, he added.

In the past, elections for the Moscow City Duma have drawn little public attention, allowing the Kremlin’s United Russia party to retain a tight grip on the legislature and ensure overwhelming support for Sergei Sobyanin, the city’s longstanding mayor and a close Putin ally.

However, the political temperature has been rising over the past year as Russians, frustrated by the government’s failure to improve their lives, vent their anger at public protests to get their voices heard. Young opposition activists have been lining up to compete in district elections in the hope of bringing about change.

Mr Sobyanin likes to present as a consensus figure in politics and is even seen as a possible Putin successor. The last thing the mayor’s office needs is an unfriendly legislature with deputies raising awkward questions about the city’s spending or political policies.

Moscow’s election commission has set the registration bar high for the poll, requiring all independent candidates to collect thousands of signatures from voters just to earn a place on the ballot. United Russia, bruised by setbacks in gubernatorial elections last year, has distanced itself from the campaign, fielding its supporters as independents free of the toxic party brand.

As the election commission drew up a final list this week for the ballot, opposition activists cried foul, complaining that while pro-Kremlin independents sailed through the approvals process, officials had found fault with signatures gathered by unwelcome candidates and refused to allow them to stand.

Among those turned away were established opposition politicians Ilya Yashin, a municipal councillor in Moscow’s Krasnoselsky district, and Dmitri Gudkov, a former Russian State Duma deputy, as well as two lawyers working for Navalny’s Anti-Corruption Foundation, Lyubov Sobol and Ivan Zhdanov. At least 10 independent Moscow municipal councillors who had hoped to advance their political careers by winning seats in the city legislature have also been disappointed.

Rejected candidates have united to organise demonstrations each evening in Moscow this week to demand free and fair elections. They are also calling for a mass protest on Saturday in Moscow’s Sakharov Square.“An independent parliament is not an abstract democratic idea. It’s a practical mechanism to defend against the abuse of our rights,” said Ilya Yashin. “So there must be a lot of us at the Saturday meeting for the right to fair elections.”

Summer, when many Muscovites leave the city for holidays, is not a favourable time for demonstrations. Weathermen are forecasting heavy rain at the weekend that may deter people from turning out on the streets. All the same, the authorities had taken a big risk in provoking public anger over the city election, said Alexander Kinev, a political scientist at Moscow’s Higher School of Economics. Only a “madman” would provoke a political scandal at a time when Russians are so ready to protest, he told Echo Moskvy radio.