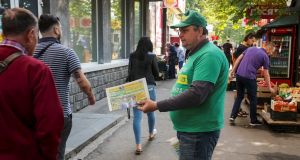 The party of Ukraine’s new president, Volodymyr Zelenskiy, is set to dominate the country’s parliamentary elections on Sunday, and hopes to secure a majority that would help the political novice fulfil his bold promises of sweeping reform.

Mr Zelenskiy (41) parlayed his popularity as a comedian into a landslide presidential election victory in April, and polls show his new party is set to capitalise this weekend on his momentum and Ukrainians’ hunger for change.

Surveys suggest his Servant of the People party – named after a popular television show in which he plays a fictional president – could take more than 50 per cent of votes across the country of 42 million people, but its electoral system makes predictions difficult.

While 225 of the 424 seats to be filled in Ukraine’s parliament will be allocated according to party lists, the rest will fall to the winners in single-mandate constituencies where influential local figures – often connected to powerful businessmen with financial interests in the city or region – traditionally dominate.

Nevertheless, the election is likely to sweep much of the old guard from parliament, with some analysts predicting that when the assembly reconvenes, three-quarters of its deputies will be people who are new to politics.

Servant of the People has refused to include any current deputies on its party list, and the new Holos (Voice) party of rock singer Svyatoslav Vakarchuk is also dominated lawyers, activists and experts who are taking their first plunge into politics.

Holos is predicted to take between 5 and 10 per cent of votes and could join forces with Servant of the People to forge a majority coalition.

The new parties share key priorities, such as a commitment to stripping wealthy oligarchs of their political influence, strengthening anti-corruption agencies and relaunching reform of a weak and compromised criminal justice system.

Parties led by former president Petro Poroshenko and ex-prime minister Yulia Tymoshenko are also expected to cross the 5 per cent threshold to enter parliament, but Mr Zelenskiy does not want to ally with figures who are connected with the failed reforms and broken political promises of the past.

His surge on to the political stage has pulled many pro-western Ukrainians towards his party at the expense of Mr Poroshenko and Ms Tymoshenko, and allowed the Kremlin-friendly Opposition Platform to move into second place in polls.

It is expected to take between 10 and 15 per cent of votes, and candidates from its ranks or those with a similar desire to repair ties with Moscow are likely to take seats in eastern and southern Ukraine where Russian influence remains strong.

With Servant of the People in power and pro-reform deputies dominant in parliament, Mr Zelenskiy could pursue an ambitious agenda on everything from modernising the economy and attracting foreign investment to trying to end a five-year war in eastern Ukraine with Russian-led separatist militia.

He hopes that an exchange of prisoners held by Ukraine and Russia could take place in the near future, and lay the foundation for an end to a conflict that has claimed more than 13,000 lives.