Former president had decided to stop co-operating with the investigation 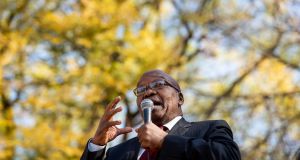 Former president Jacob Zuma addresses his supporters after the end of the fourth day of his testimony at a public sector corruption inquiry, in Johannesburg, South Africa. Photograph: Yeshiel Panchia/EPA

Former South African president Jacob Zuma agreed on Friday to withdraw a decision he took earlier in the day to stop co-operating with an inquiry into public sector corruption that is investigating his involvement in alleged graft.

The agreement was reached at the Judicial Commission of Inquiry into Allegations of State Capture, Corruption and Fraud in the Public Sector between Mr Zuma’s lawyers and the inquiry’s after the presiding judge, deputy chief justice Raymond Zondo, intervened.

On Friday morning Mr Zuma’s lawyer, Muzi Sikhakhane, told Mr Zondo that his client had decided to no longer participate in the inquiry because he was asked there under false pretences, and was being treated as an accused.

“Basically, our client from the beginning was treated as someone who must come and answer, as someone who is accused . . . This commission does not know who is guilty, it’s trying to find out,” Mr Sikhakhane complained.

According to the new arrangement brokered by Mr Zondo, the inquiry’s legal team will now have to inform Mr Zuma ahead of his next appearance of the areas of whistleblower evidence that it wants to question him on.

The former president will then be allowed to give written statements through his legal team that indicate his stance and response to those specific issues.

“It is contemplated in this agreement that at a certain stage, the former president will come back and give evidence [at the inquiry],” Mr Zondo said, before reminding Mr Zuma he had the legal power to summon him to appear before him.

Prior to Mr Zuma appearing at the Johannesburg-based inquiry for the first time on Monday, which he did voluntarily, evidence leader Paul Pretorius and his legal team had refused to send him the questions that he would be asked to address.

Mr Zuma (77) had subsequently become upset by the line of questioning used by Mr Pretorius, saying it amounted to a cross-examination on details of evidence given by whistleblowers that he had no knowledge of.

The inquiry had been adjourned by Mr Zondo on Wednesday afternoon to allow lawyers from both sides to find a compromise, but early on Friday it became apparent these deliberations had been unsuccessful.

Since the inquiry began hearing evidence last August, whistleblowers have accused Mr Zuma – and senior members of his government – of bribery, facilitating public sector tender fraud, and using his influence as president to bypass official regulations.

The Gupta brothers, Ajay, Atul, Rajesh, and their associates, as well as logistics company Bosasa and its CEO Gavin Watson, are accused of being the main private sector beneficiaries of the corrupt activities that have been outlined so far. They all deny any wrongdoing.

Mr Zuma told the inquiry on Monday that the corruption allegations were part of a 29-year-old plot involving international and local intelligence agencies that aims to end his political career.

The new agreement appears to give Mr Zuma – who was forced to resign as president in February 2018 in part over the corruption allegations he faces – a higher level of insulation from investigation by the inquiry than he previously had been afforded by its lawyers.