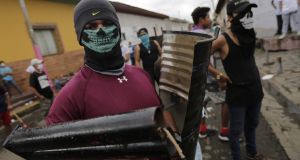 Anti-government demonstrators at an improvised barricade in the town of Masaya, 35 km from Managua. Photograph: Inti Ocon/ AFP/ Getty Images

Auxiliadora Cardoze greeted me in a backyard where exuberant plants and fresh washing left just enough room for the plastic chairs and coffee cups laid out for my visit. “This isn’t my home,” she clarified. “It would be too risky to bring you there.”

The driver who took me to Masaya, a small town 30km from Managua, asked me not to mention his name while the fixer who set up the interview also insisted on anonymity. My list of interviewees had shrunk in the months preceding my arrival as journalists and activists fled to Costa Rica, citing death threats.

I first saw Auxiliadora in a video circulating on social media in June 2018. The grainy images, filmed behind a doorway, showed her waving a white rag as she cried “Ayúdenme” – “Help me!” – at a row of police officers. A body lay face down in front of her, in a pool of blood. Marcelo Mayorga, Auxiliadora’s 40-year-old husband, had been struck by a single bullet.

Nicaragua’s current crisis began in April 2018 when elderly citizens protesting against pension cuts were beaten off the streets. The resulting images sparked widespread indignation and prompted hundreds of thousands of Nicaraguans to march in solidarity nationwide. The government responded with deadly force and protests intensified as Nicaraguans built barricades and blocked highways, while schools remained shut, universities were occupied and the government appeared close to collapse.

Marcelo and Auxiliadora were two more “autoconvocadxs”, the “self-organised” citizens who took to the streets and then stayed there. “In the beginning the feeling was, ‘we must reverse the pension cuts’,” said Auxiliadora, “but when the government began to kill people it became, ‘we must get rid of Ortega’.” She meant Daniel Ortega – president of Nicaragua, for the second time, since 2007.

The casualties in the violence were mostly students but also included workers, infants, small business owners, police and former Sandinistas.

In Masaya, Marcelo and Auxiliadora kept their three children at home while they took turns distributing food and medical supplies. During the street battles Marcelo, who owned a motorbike, remained behind the crowds, ferrying the wounded to safety.

On occasions when an undercover agent was identified behind the barricades, Marcelo was tasked with bringing the person to the local priest, Fr Edwin Roman, who would arrange a prisoner swap. The town’s embattled police chief, Ramón Avellán, would then appear with several “hostages” of his own. “We sent people back as we found them,” claimed Auxiliadora, “but our prisoners returned black and blue.”

Masaya was declared a “liberated zone” in June 2018 but the triumph was short-lived as a convoy of police and paramilitaries advanced from Managua in mid-July, shooting anyone who stood in their way. Masked gunmen were widely believed to have been recruited from retired Sandinista ranks.

“An old colleague invited me to join a paramilitary group,” a former senior Sandinista told me, requesting anonymity. “They believed I was still loyal to Ortega.”

A slingshot was found beside Marcelo’s inert fist, no match for the army-issue weapons used by police and paramilitaries. The police claimed that Marcelo was caught in crossfire but there is no evidence of any formal investigation.

The Ortega administration insisted that US-backed coup plotters were behind the protests, using criminals to topple a progressive government. More than 1,000 protesters were imprisoned, most of them young students with no previous political involvement and no criminal record.

Carlos Brenes, once a Sandinista hero, was thrown in jail, charged with “murder, kidnap, assault, rape, starting fires, creating terror and anxiety”. Most prisoners were charged with “terrorism and organised crime”. The government also punished state workers who aided protesters and Nicaragua’s Medical Association estimated that 250 doctors were dismissed for treating the wounded.

In July 2018 the government allowed the Interdisciplinary Group of Independent Experts (GIEI), which was established by the Inter-American Commission on Human Rights, to investigate the violence. It concluded that violence perpetrated by state security forces was systematic and sanctioned from above while “isolated acts of violence” by protesters “invariably occurred as a reaction to the repression”, notably when troops stormed barricades inside towns and university campuses.

Auxiliadora’s nightmare continued when she was harassed by gunmen who visited her workplace and by armed men idling outside her home. Under pressure, she gave up her job and is currently receiving psychological help.

I left the humid backyard and walked the few streets to Masaya’s Catholic church where Fr Roman was admonishing parents who jostled for photos of baptised babies around the altar. “This is not a photo shoot,” said Roman, in a firm tone. “It is a commitment to a set of values for life.”

A slim, soft-spoken man in his late 50s, Roman has been vilified by the government for opening his church to the protesters. Nicaragua’s church hierarchy remains cautious but individual priests and bishops have spoken out against Ortega.

Roman was watching TV in bed on April 20th, 2018 when he heard a commotion outside the church. He opened a side door and dozens of youths came rushing in, fleeing pursuing police. “They were bloodied and beaten,” recalled Roman, “so I brought them water and soap.”

In the days that followed the church served as a meeting place and health post while townspeople left food at the door and a communal kitchen was established. Masaya’s homeless moved in when gunmen fired indiscriminately into a nearby park. When the police recaptured the town, the church finally served as a morgue, the bodies of protesters left there, awaiting burial.

By September 2018 the death tally was 325, with 2,000 more injured, 1,000 jailed and 60,000 more exiled in Costa Rica. Since then police have prohibited all public mobilisation, aggressively detaining anyone suspected of joining others at likely gathering points.

Nicaraguans have been creative in beating the ban, organising small acts of resistance and sharing them on social media. The most significant “protest” in recent months was a national strike which emptied the streets.

“The greatest success of the opposition has been in remaining non-violent,” said Azahalea Solis, a member of the Civic Alliance, an umbrella opposition group engaged in talks with the government mediated by the Catholic Church. “We will take back the streets when conditions are right.”

In the past three months, most of the political prisoners (“hostages”, according to the opposition) have been released but they face immediate re-arrest should they engage in protest. “In reality all Nicaraguans are in jail,” said Ana Quiros, a women’s health advocate who was beaten, detained and deported by police in November 2018.

The Nicaraguan economy is in decline, with 350,000 jobs lost since the crisis began as investors and tourists stay away. Meanwhile, the flow of Venezuelan oil money, once a major source of finance for social projects, has dried up, along with Ortega’s approval ratings.

1927-33: Guerrillas led by Augusto Cesar Sandino campaign against US occupation, forcing their withdrawal.

1979: Rebels from the Sandinista National liberation front (FSLN) seize power, installing a broad-based Junta of National Reconstruction. The FSLN government led by Daniel Ortega nationalises land held by the Somoza family and turns it into co-operatives.

1982: US-sponsored attacks by Contra rebels based in Honduras begin; state of emergency declared.

1984: Daniel Ortega elected president; US mines Nicaraguan harbours and is condemned by the World Court. Reparations are sanctioned but never paid.

December 2003: Former president Arnoldo Aleman jailed for 20 years for corruption. A year later he is transferred to house arrest and ultimately freed in 2009.

2006: MPs approve a new Bill which bans abortion in all cases, even where the mother’s life is at risk.

2006: Ex-president Daniel Ortega is returned to power in elections.

2011: President Ortega is re-elected for another five-year term.

2019: Ortega engaged in on-off peace talks with the Civic Alliance umbrella opposition who demand electoral reforms, the release of the remaining political prisoners, the restoration of civil liberties and early elections.