Violent protests in Iraq over removal of popular commander 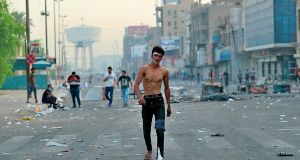 Iraq is on a hair trigger. The removal from his post a week ago of widely popular counter-terrorism commander Lt Gen Abdel Wahhab al-Saadi has exploded into violent protests countrywide.

He rejected reassignment to the defence ministry and said he was prepared to go to jail for refusing the order to leave his current post. Government critics launched a support campaign using the Twitter hashtag, “We are all Saadi.”

Iraqi terrorism expert Husham al-Hashimi warned, “Iraq is still at war with [Islamic State] extremists and terrorists, and such a decision will definitely affect the fight of Iraq against [Islamic State] remnants, and will empower the will of the terrorist groups.”

Three other senior commanders of the anti-Islamic State campaign have been cashiered over the past year while Iraqi prime minister Adel Abdel-Mahdi has come under US pressure to rein in Shia paramilitaries tied to Iran. Some Iraqis blame them for Saadi’s removal.

Demonstrators have condemned corruption and the government’s failure to deliver electricity, water, medicine, reconstruction, and agricultural and industrial recovery since the 2003 US invasion and occupation. Crowds thronging the streets of Iraq’s cities from Kirkuk in the North to Nasiriya in the south cry, “Just give us a country”. They fear Iraq is a failed state.

Many protesters demand “regime change” rather than the fall of the government formed nearly a year ago by Abdel-Mahdi, a compromise figure chosen by leading parliamentary factions because he has neither party nor militia backing.

He has been unable to meet popular demands because the state structure is captive of deeply entrenched corrupt politicians who are exploited by both the US and Iran.

By contrast, Saadi played a major role in the successful campaign to defeat Islamic State, notably in Mosul. He began his army career under deposed president Saddam Hussein, received training from US forces, and is not connected with the politicians and their sponsors who are held responsible for Iraq’s woes.

During earlier protests, Iranian offices have been attacked and this week marchers have attempted to reach the US embassy in Baghdad’s fortified Green Zone.

By regime change, Iraqis mean scrapping the sectarian system imposed by the US and its replacement with a different model. Many call for a return to a secular presidential system.

Iraq’s current troubles began when the US demobilised the army, dismissed experienced administrators, outlawed the ruling Baath party, introduced a political model based on sectarian and ethnic affiliations, and installed an Iran-loyal Shia fundamentalist regime.

Persecution of Baathists and Sunnis led to resistance and the rise of Islamic State; mismanagement and corruption precipitated ruin.

Between 2003 and 2014 more than $220 billion was spent on reconstruction of Iraq’s infrastructure; within two years facilities had broken down due graft and poor maintenance. Up to $450 billion dollars in public funds are said to have disappeared. Iraq is the world’s 12th most corrupt country, according to Transparency International.

At least 20 protesters have been killed and 400 wounded in three days of unrest.