Brexit: Boris Johnson says he will not quit to avoid requesting delay 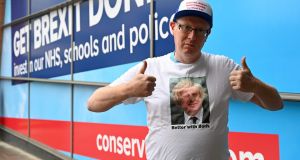 A supporter of UK prime minister Boris Johnson in Manchester on the first day of the annual Conservative Party conference. Photograph: Paul Ellis/AFP/Getty

Boris Johnson has ruled out resigning as prime minister to avoid having to seek a three-month delay to Brexit if he fails to reach a deal with the EU next month. An act passed earlier this month obliges Mr Johnson to seek a three-month extension to article 50 if he has not secured a deal by October 19th.

“I have undertaken to lead the party and my country at a difficult time, and I’m going to continue to do that. I believe it’s my responsibility to do that and I think that it’s our job to get Brexit done on October 31st and to move the country on,” he told the BBC’s Andrew Marr Show at the start of the Conservative Party conference in Manchester.

Mr Johnson has faced criticism for describing the law drafted by Hilary Benn obliging him to delay Brexit as a “surrender Bill”. But Labour Brexiteer Kate Hoey told a meeting at the Conservative conference that she approved of the prime minister’s language.

The EU has dismissed four British “non-papers” presented in recent weeks as unrealistic in terms of finding a legally operable alternative to the backstop. The UK is expected to present detailed proposals towards the end of this week, just two weeks ahead of the meeting of the European Council on October 17th.

MPs last week refused to agree to a parliamentary recess for the Conservative conference and the party has made plans for MPs to rush from Manchester to Westminster for votes if necessary. The Scottish National Party has suggested that opposition parties could seek to topple Mr Johnson in a no-confidence vote this week.

The party fears that Mr Johnson could ignore the law and refuse to seek a delay to Brexit, taking Britain out of the EU without a deal on October 31st. They want to replace the Conservatives with a cross-party emergency government that would secure a delay to Brexit and immediately call a general election.

Commons leader Jacob Rees-Mogg told the Conservative conference that any such caretaker government would be a “Remainer coup” and that those who backed it would be punished at the ballot box at the next general election.

Jeremy Corbyn said the prospect of an emergency government was becoming more likely every day, adding that he was ready to lead it. The SNP would back Mr Corbyn as prime minister but the Liberal Democrats and some Independents who have defected from the Conservatives and Labour want a more neutral figure to lead any caretaker government.

Mr Rees-Mogg said the mood in the House of Commons had changed and that Conservative Brexiteers would support any deal that had the backing of the DUP.

“I think the mood has changed in the country at large, that everybody now wants to leave and start talking about other things,” he said.

“I think that’s true in the House of Commons as well. I think if the DUP are happy with the deal, there will be very few Conservatives, including those who are without the whip, who are against a deal.”