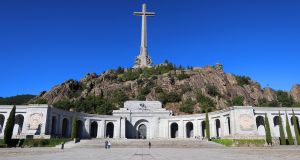 The Valley of the Fallen in Madrid, Spain, where Franco is currently buried. Photograph: Angel Diaz/EPA

Spain’s supreme court has declared lawful a plan by the Socialist government to exhume the remains of the dictator Francisco Franco from his mausoleum and transfer them to a cemetery.

The family of Franco, who ruled Spain from 1939 until his death in 1975, had appealed against the exhumation, which had been scheduled to take place in June of this year.

This was the latest of several legal and bureaucratic obstacles which have delayed the process since it was first announced in the summer of 2018.

However, after little more than an hour of deliberation, the six magistrates ruling on the case unanimously rejected the objections of the Franco family on Tuesday.

“Today we witness a great victory for Spanish democracy,” tweeted acting prime minister Pedro Sánchez. “A determination to heal the suffering of the victims of Francoism always guided the government’s actions.”

Franco is buried in a basilica drilled into the side of a mountain at a site known as the Valley of the Fallen, about 97km north of Madrid. More than 30,000 victims of both sides of the 1936-39 civil war are also buried there.

The Francisco Franco Foundation, which promotes the legacy of the dictator, supported the Franco family’s appeal against the exhumation, as did the Association for the Defence of the Valley of the Fallen and a Benedictine religious community which manages the basilica at the site.

The appeal also claimed that if the exhumation were to take place, then the remains should be reburied in a crypt beneath Almudena Cathedral in Madrid, a possibility that the government staunchly opposed. The court ruled in favour of the government’s choice of reburial site: Mingorrubio cemetery in El Pardo, outside Madrid, where Franco’s wife Carmen Polo is already buried.

Although the Franco family has said it will appeal again, this time to the constitutional court, the government appears confident that claim will be rejected and the process will not be delayed any further.

Deputy prime minister Carmen Calvo said the government will now move to carry out the exhumation and transferal “as soon as possible”. The Socialist administration hopes that will happen before the campaign begins ahead of a November 10th general election.

The president of the Association for the Recovery of Historical Memory, Emilio Silva, welcomed the news, although he described as “absurd” the fact that Franco would be reburied in Mingorrubio, which is public property.

Although politicians on the left celebrated the court ruling, many on the right were more critical.

“Sánchez has spent a year playing with [Franco’s] bones in order to divide us into left and right, but a lot of Spaniards don’t care about it at this point,” said Albert Rivera, leader of the Ciudadanos party.