TV vet arrested in relation to murder of mother-in-law 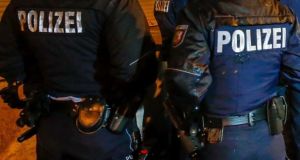 German police have arrested a TV vet over the murder of his mother-in-law. File photograph: Stephan Schuetze/AFP/Getty Images

German police have arrested a TV vet over the murder of his mother-in-law in an unusual case involving a fatal car crash and a high-profile politician.

Last Sunday, shortly before 11am, three vehicles were involved in a collision on the A3 motorway near Nuremberg, Bavaria. The 75-year-old driver of one of the vehicles, a Ford, died at the scene after his car collided first with the rear-end of a vehicle in front and then hit a tree.

One witness was the interior minister of Bavaria, Joachim Herrmann, a politician for the Christian Social Union, sister party to chancellor Angela Merkel’s Christian Democratic Union. Herrmann, who was being driven to an appointment, instructed his driver to stop the car, called the emergency services and rushed over to the crash site.

“It was obvious that there were people with severe injuries here,” he told the German news agency dpa.

A third car involved in the crash, a Hyundai driven by a 53-year-old vet, named in German media as Ralf L, had come to a halt on the hard shoulder. For reasons still unknown, the driver’s wife jumped out of the vehicle and tried to cross to the other side of the motorway, but was hit by an oncoming car in the opposite lane.

She was airlifted to a hospital in Nuremberg, with her husband, a regular guest on a documentary series about pets on the German TV channel Vox, checking into a hotel near the facility.

In the early evening of the same day, police found the injured woman’s 76-year-old mother dead in a house in Borchen, near the city of Paderborn, where she lived with her daughter and son-in-law.

In the early hours of Monday police moved to arrest Ralf L in his hotel room on suspicion of murder.

Neighbours told police the couple had abruptly announced they were going on holiday to southern Germany, taking with them two dogs that were normally looked after by the woman’s mother.

A police spokesperson told the Guardian that Ralf L had so far refused to co-operate and that the murder investigation was ongoing. – Guardian