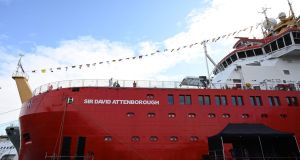 A scientific research ship the public wanted to call Boaty McBoatface will be formally named after Sir David Attenborough on Thursday.

Britain’s Duke and Duchess of Cambridge will tour the RRS Sir David Attenborough at the Cammell Laird shipyard in Birkenhead, Merseyside, alongside the naturalist to see the state-of-the-art equipment on the ship’s flight deck.

The RRS Sir David Attenborough, which cost around £200 million (€225m) to build, is set to act as a “floating research fleet”, allowing scientists to study the world’s oceans and understand more about climate change.

It was commissioned by the Natural Environment Research Council (NERC), built by shipbuilding company Cammell Laird to a Rolls-Royce design, and will be operated by the British Antarctic Survey (BAS).

Housing state-of-the-art equipment, the ship will be available to the UK research community and allow scientists to remotely deploy robotic instruments to areas humans cannot access.

Why is it needed?

The vessel is set to replace two other polar research ships: The RRS James Clark Ross, which is nearing the end of its 25-year lifespan, and the RRS Ernest Shackleton, which was returned to its owners GC Rieber this year after 20 years of service.

The ship, according to BAS, has better fuel efficiency compared to its older counterparts and is expected to save more than £100 million in operating costs over its 30-year lifespan.

It will operate in both Antarctica and the Arctic and will be able to endure up to 60 days in sea ice without being refuelled.

What are its features?

Weighing around 10,400 tonnes — that is 1,400 elephants combined — the research ship hosts a wide range of specialist scientific equipment that will allow researchers to study the ocean, seafloor and atmosphere.

Robotic submarines and marine gliders will gather information on ocean conditions and marine life for scientists working in the ship’s on-board laboratories, while airborne robots and environmental monitoring systems will provide data on the surrounding environment.

Other features include an ice-strengthened hull designed to break through ice up to one metre thick, and a “moon pool” — a 4m by 4m vertical shaft running through the vessel that allows instruments to be deployed through an opening in the hull rather than over the side.

The ship has beds for up to 30 crew and 60 scientists and support staff.

It will also be able to deploy and recover large remotely-operated marine vehicles.

So what happened to Boaty McBoatface?

Despite topping a public poll in 2016, the name was vetoed as the moniker for the polar research ship.

Initially suggested as a joke by a voter, Boaty was the out-and-out favourite, amassing more than 124,000 votes in a poll conducted by the UK’s Natural Environment Research Council.

Jo Johnson, who was science minister at the time, said the suggestions for the name of the vessel had “captured the imaginations”, but added that Boaty McBoatface would instead explore the polar seas as a yellow submarine.

The minisub has since performed its first mission, investigating water flow and turbulence in the dark depths of the Orkney Passage, a 3.5m (2.17 mile)-deep region of the Southern Ocean.

Boaty will continue its scientific missions in the polar regions alongside RRS Sir David Attenborough.–PA