Britain is not proposing border posts along the frontier between Ireland and Northern Ireland after Brexit, but there will have to be checks somewhere, British Prime Minister Boris Johnson has said. Video: Reuters/BBC 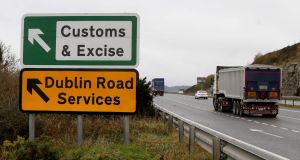 A sign on the main road outside Newry, Northern Ireland, pointing towards an old customs and excise station near the border between Northern Ireland and the Republic. Photograph: AFP

British prime minister Boris Johnson has dismissed criticisms of leaked proposals suggesting customs posts be placed on both sides of the Irish Border, saying this plan is not what his government is going to propose to deal with Brexit.

Mr Johnson’s formal proposals are due to be submitted to Brussels within days and he said it would become apparent if there is “no way of getting it over the line from their point of view” by later this week.

Earlier, Tánaiste Simon Coveney said the proposals were a “non-starter” and said it was “time the EU had a serious proposal from the UK government if Brexit deal is to be achievable in October”.

The Government and the European Union on Monday night rubbished the leaked British proposals on establishing customs posts on both sides of the Border after Brexit.

Senior sources in Dublin and Brussels said the proposals, contained in papers tabled in talks with EU negotiators and reported by RTÉ, showed there was little if any chance of a breakthrough in the Brexit talks.

Mr Johnson urged leaders in Brussels, Dublin and Berlin to work with him as the “rubber hits the road” on efforts to strike a deal ahead of the October 31st scheduled Brexit date.

Speaking to the BBC on Tuesday, Mr Johnson said the EU and Dublin were not talking about the UK government’s final plan but rather “some stuff” that was proposed previously.

He said Britain was planning to table a “very good offer” soon and that this would not involve customs posts.

Mr Johnson and the DUP, which supports his Conservative Party in Westminster, are firmly opposed to the backstop, an insurance policy designed to avoid the return of a hard Irish border which was agreed between the EU and UK as part of the Brexit withdrawal agreement.

Non-Paper = Non-Starter. Time the EU had a serious proposal from the UK Govt if a #Brexit deal is to be achievable in October. NI and IRE deserves better!

Mr Johnson says the most important thing is to “bust out” of these backstop arrangements but in a way that protects the Belfast Agreement.

He declined to discuss what would be in the final British proposals, but said he wanted to exploit “the freedoms that are so vital for Brexit”.

Mr Johnson said getting rid of the backstop would allow the UK to have an exciting relationship with the EU and the rest of the world. He said there was no point in Britain leaving the EU if it had to stay in the customs union as it would be bound by EU trade policy.

Brexit junior minister James Duddridge, responding to an urgent question about Irish border customs arrangements, told the Commons: “There is no intention to have physical checks at the border.

“I’m not choosing my words carefully there — there are no plans to do that, I can reassure him.

“I do know he was perhaps thinking about the reports in the Northern Ireland press that were suggesting there might be checks near the border? That is not the intention, those reports simply are incorrect.”

Mr Duddridge was replying to questions from Hilary Benn, Labour chairman of the Exiting the European Union Committee. Mr Benn had asked if the UK Government is proposing “customs clearance sites or zones anywhere in Northern Ireland” and warned such sites would create risks for the peace brought by the Good Friday Agreement.

He also asked if the Government is planning to “track lorries cleared at any such sites using GPS”, to which Mr Duddridge said he “can’t get into the detail of the proposals at that level now because they’re subject to ongoing negotiations and discussions at the commission”.

Sinn Féin leader Mary Lou McDonald said the leaked proposals “essentially” involved the return of a hard border in Ireland and that she would “absolutely not” back such a proposal.

“What has been described in this document is essentially a hard border on the island of Ireland,” she said. “Anything that causes there to be customs, tariffs, checks anywhere represents a hardening of the border.”

Speaking to BBC Radio 4’s Today programme, Ms McDonald said the proposals amounted to a “sabotage” of the peace process in Northern Ireland.

“We have explained this (the importance of no border checks) in painstaking detail to Mrs May in her time and now prime minister Boris Johnson,” she said.

Northern Ireland secretary Julian Smith told BBC Radio Ulster “it’s clear to me...that it’s not possible to put anything like a customs facility in Newry or Fermanagh or many other locations away from the Border”.

He added: “The Border in Northern Ireland is not just the Border, it’s the area around the Border, I’m very clear on that.”

He said the facilities would still be an issue even if placed five or 10 miles from the Border.

“I’m clear that we can’t have customs facilities in the places mentioned in the reports,” he said. “I’m clear on that and the government is clear the Good Friday Agreement needs to be respected.”

Minister of State for European Affairs Helen McEntee said the proposals were not credible and that “time is running shorter and shorter, the ball is now in the UK’s court”.

“This won’t be accepted, the backstop protects the all-island economy. What has been leaked doesn’t go any way far enough,” she told Newstalk. “Things tend to change at a fast pace in the UK.” – Additional reporting from agencies