Civilians among victims of US air strikes in Somalia, says rights group 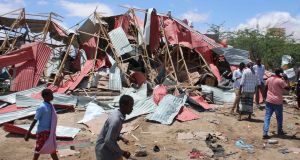 People gather at the scene of an attack on an Italian military convoy in Mogadishu on Tuesday. Photograph: Said Yusuf Warsame/EPA

Dozens of civilians have been killed or injured by US army air strikes in Somalia, after being wrongly targeted as “al-Shabaab terrorists”, according to Amnesty International.

The human rights group’s latest investigation found that three men killed in an air strike in March were civilian farmers with no association to the militant Islamist group. Between them, the three men left behind 19 children, according to Amnesty.

The US military’s Africa Command (Africom) denies the men were civilians.

Ella Knight, campaigner for Amnesty’s military security and policing team, told The Irish Times the organisation had been able to investigate only six of the more than 130 air strikes that have been carried out by Africom since April 2017. In just those six, 17 civilians were killed, she said.

“Ultimately we want the US to conduct proper, thorough, urgent investigations into, firstly, all the strikes we’ve documented and presented evidence to them [about[the US] have or had reporting mechanisms in places like Iraq and Afghanistan. If they wanted to they would have the means to,” Ms Knight said. “We feel like the US is all too quick to label parts of the Somali population as terrorists or al-Shabaab members, [but] they’re not carrying out investigations on the ground.”

Since Donald Trump became president in 2016, the US military has roughly tripled the number of air strikes it is carrying out in Somalia each year, according to Pentagon figures.

Amanda Sperber, an investigative journalist who has been reporting on US air strikes in Somalia since mid-2018, said language barriers and a lack of access make it difficult to travel to frontline villages or spend extensive time embedding there, though it was “far from impossible”.

“I do not think this is a strategic cover-up by the US, I think it’s a lethal case of confusion and arrogance. I am not sure what needs to be done to encourage full transparency, but definitely engaging with Somali civilians would be a place to start,” she said.

In a statement to The Irish Times, an Africom spokesman said it had arrived at a reasonable certainty that the men Amnesty says were civilians were members of al-Shabaab, and actively supporting al-Shabaab operational activity.

“Africom willingly receives allegations from multiple sources, including media, human rights organisations and social media,” a spokesman said. “All allegations brought to the attention of Africom are thoroughly assessed. Africom minimises the risk to civilians by following a thorough, reasonable methodology that accounts for weapons effects and mitigates risk to civilians.”

Al-Shabaab claimed responsibility for attacks on Monday in Somalia on an Italian military convoy and a on a base where US special forces train Somali commandos. No casualties were reported in either attack. The US military said it and partnered forces had killed 10 militants and destroyed a vehicle in response to the attack on its base.