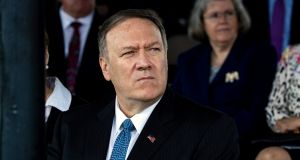 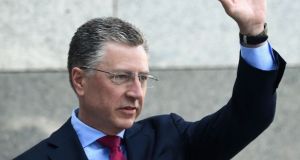 Two officials who were instructed by US secretary of state Mike Pompeo not to appear before Congress as part of Democrats’ impeachment inquiry are to testify.

Kurt Volker, who was US president Donald Trump’s special representative for Ukraine until his resignation last Friday, will testify on Thursday, while Marie Yovanovitch, the former US ambassador to Ukraine who had been due to give a deposition today, will appear before congressional committees on October 11th.

Both Ms Yovanovitch and Mr Volker were involved in the Trump administration’s efforts to reach out to the Ukrainian government and are subjects of interest in the impeachment inquiry announced by House Speaker Nancy Pelosi last week.

The development came hours after US secretary of state Mike Pompeo announced he was blocking five current and former State Department officials – including Ms Yovanovitch and Mr Volker — from providing depositions to Congress, accusing Democrats of trying to “intimidate” officials over the Ukraine controversy.

In a sign of the constitutional battle ahead between the executive and legislative branches of government as Democrats begin an impeachment inquiry into Mr Trump, Mr Pompeo said the committee’s request for depositions were “not feasible”.

“I’m concerned with aspects of your request that can be understood only as an attempt to intimidate, bully and treat improperly the distinguished professionals of the US Department of State, including several career foreign service officers,” he wrote to the head of the Foreign Affairs committee on Tuesday, adding that he would not tolerate such “tactics.”

The other three officials who were named by Mr Pompeo and are still state department employees are deputy assistant secretary of state George Kent, State Department Counselor T Ulrich Brechbuhl and America’s ambassador to the European Union, Gordon Sondland.

As I learn more and more each day, I am coming to the conclusion that what is taking place is not an impeachment, it is a COUP, intended to take away the Power of the....

Mr Trump overnight ratcheted up his attacks on those pursuing the complaint, saying that it amounts to a “coup”.

“As I learn more and more each day, I am coming to the conclusion that what is taking place is not an impeachment, it is a COUP,” he tweeted.

The tweet marked the seventh time this year that he has tweeted about being the subject of a coup attempt, but the first since the scandal erupted over his interactions with Ukraine’s president.

Separately, congressional leaders were invited to a meeting on Wednesday by the State Department’s independent watchdog “to discuss and provide staff with copies of documents related to the State Department and Ukraine.” It was not clear if Mr Pompeo was aware of the proposed meeting.

It has emerged in recent days that Mr Pompeo himself listened in to the disputed call between Mr Trump and Volodymyr Zelenskiy on July 25th.

The Trump administration is also facing fresh allegations that it co-opted foreign governments to help domestic investigations, following confirmation that Mr Trump asked Australian prime minister Scott Morrison to assist in the Department of Justice’s inquiry into the origins of the Mueller investigation. Following the completion of Mr Mueller’s report earlier this year, attorney general William Barr appointed John Durham to lead an investigation into the origins of the Russia investigation amid concerns that US intelligence agencies may have improperly surveyed members of the Trump campaign team. Australia’s involvement stems from 2016 when Australia’s top diplomat in London informed the FBI about alleged Russian involvement in the election – a key starting-point for the Russia investigation.

The New York Times reported that White House officials sought to limit oversight of Mr Trump’s phone call with Mr Morrison in a similar way that the disputed phone call of July 25th with the Ukrainian president was protected.

As well as Australia’s involvement, Mr Barr has also travelled to Italy in recent weeks to seek information from the Italian government about US intelligence efforts to oversee the Trump campaign.

Mr Trump continued his attack on the whistleblower at the centre of the controversy on Tuesday, asking why he was not permitted to interview the anonymous official as well as “the person who gave all of the false information to him.”

“This is simply about a phone conversation that could not have been nicer, warmer, or better,” he tweeted, noting that the Ukrainian president had said he received “no pressure” during the phone call. “It is just another Democrat Hoax!”

Prominent Republican Chuck Grassley, however, spoke out in support of the whistleblower.

“This person appears to have followed the whistleblower protection laws and ought to be heard out and protected,” he said. “We should always work to respect whistleblowers.”