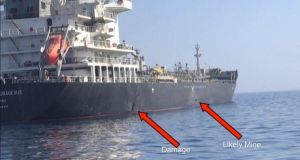 Damage from an explosion, left, and a likely limpet mine can be seen on the hull of the civilian vessel M/V Kokuka Courageous in the Gulf of Oman, June 13th, 2019. Photograph: US Navy/Getty Images)

The US is hoping to “build international consensus” around what officials claim is Iran’s responsibility for damaging two oil tankers in the Gulf of Oman, as UK officials joined the US in formally accusing Iran of carrying out the attacks.

The efforts come after the US released grainy surveillance footage of an alleged Iran Revolutionary Guard patrol boat, with men who appear to remove a magnetic limpet mine on the hull of one of the ships.

The acting defence secretary, Patrick Shanahan, said the US was looking to “build international consensus to this international problem” on Friday.

The attack was not only a “US situation”, Mr Shanahan said. He listed several other countries that operated vessels in the waters. “When you look at the situation, a Norwegian ship, Japanese ship, Kingdom of Saudi Arabia, UAE,” Mr Shanahan said, referring to attacks a few weeks prior.

Oil prices have risen 3.4 per cent following the attack, which came in the Strait of Hormuz, a critical shipping channel for international oil supplies. Insurance for ship operators in the area jumped 10 per cent.

Saudi Arabia, one of the world’s largest oil producers, also uses the strait. On Saturday, the Saudi energy minister, Khalid al-Falih, said “there must be a rapid and decisive response to the threat” to secure Gulf energy supplies and consumer confidence, according to a tweet from the ministry.

The message was echoed by the Japanese industry minister, Hiroshige Seko, who said ministers agreed on the need to “work together to deal with the recent incidents from [an] energy security point of view”.

The US military released a video on Thursday, saying it showed Iran’s Revolutionary Guards were behind the explosions that damaged the Norwegian-owned Front Altair and the Japanese-owned Kokuka Courageous.

All 23 crew members of the Norwegian ship landed at Dubai International Airport on Saturday, according to a statement from the vessel’s operator

The UK officially joined the US in accusing Iran of perpetrating the attack on Friday night, in a statement from the foreign office saying: “It is almost certain that a branch of the Iranian military – the Islamic Revolutionary Guard Corps – attacked the two tankers on June 13th. No other state or non-state actor could plausibly have been responsible.”

The statement continued: “There is recent precedent for attacks by Iran against oil tankers. The Emirati-led investigation of the May 12th attack on four oil tankers near the port of Fujairah in the [UAE] concluded that it was conducted by a sophisticated state actor. We are confident that Iran bears responsibility for that attack.”

Although Donald Trump claimed the attacks had “Iran written all over” them, other heads of state have been more cautious in assigning blame.

“It’s very important to know the truth and it’s very important that responsibilities are clarified. Obviously that can only be done if there is an independent entity that verifies those facts,” Mr Guterres told reporters on Friday.

The German foreign minister was also cautious, saying the video released by US Central Command was “not enough” to make an assessment, according to ABC News.

Several world powers have meanwhile called for diplomatic efforts to lower tensions, including China and Russia, which have closer ties to Iran. The European Union called for “maximum restraint”.

Iran, meanwhile, has denied responsibility for the attack. Iran’s ambassador to the UK, Hamid Baeidinejad, said the claims were like “false fabrications during World War I, the Vietnam war and Iraq war that were designed to instigate military interventions and armed conflicts in different parts of world.”

The attack came as the Japanese prime minister, Shinzo Abe, visited Iran in an attempt to mediate new talks on a nuclear agreement. One of the ships attacked was a Japanese vessel called the Kokuka Courageous. Iran is holding the mostly Russian crew of one of the ships, the Norwegian-owned Front Altair. – Guardian/Agencies

1 Tyrone midwife on the cover of Vogue magazine
2 Pubs reopening will not mean ‘fellas having a few pints and peanuts’, Holohan warns
3 Donald Trump is in trouble, and that could spell very bad news
4 ‘White Irish people have never had to think about this’
5 Trump’s claim it was a ‘great day’ for George Floyd is criticised
Real news has value SUBSCRIBE