‘I’m the most honest man in the world,’ says former mayor on trial for corruption, tax fraud 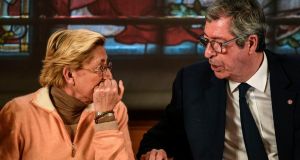 The national financial prosecutor’s office drew a moral lesson from the case of the state against Patrick and Isabelle Balkany in its summing up on June 13th.

“Many turned this case into a symbol of the impunity of the powerful, and of the impotence, slow pace and failure of justice to deal with financial crime. Well we’re there,” the prosecutors said.

Patrick Balkany (70) was the conservative mayor of the affluent Paris suburb of Levallois for 36 years. His wife Isabelle (71) was deputy mayor.

With a fortune estimated at €16 million, the Balkanys paid no wealth tax between 2010 and 2015. Between 2009 and 2014, they paid no tax at all. In fact, the French treasury reimbursed them €7,130 in credits accumulated for the employment of domestic servants.

Isabelle Balkany tried to take her own life before the trial opened a month ago. She did not attend any hearings. Her husband Patrick, a cigar-smoking, old-time politician with the common touch, drew huge crowds. Back in 2013, he told a television interviewer, “I’m the most honest man in the world.”

The Balkanys were “awash in cash”, the court heard. Former employees described bundles of cash left lying around the house, and in a safe that the mayor forgot to close one day.

When the couple went to their mill house in Giverny for weekends, Mrs Balkany would stop at the Intermarché to break €500 banknotes into smaller denominations. The dry cleaner found seven €500 notes in Mr Balkany’s suit pocket.

Prosecutors divided the case in two. They requested four years in prison for Mr Balkany and two years plus a two-year suspended sentence for his wife, for the first part, which dealt with tax fraud. The verdict on tax fraud will be handed down on September 13th.

For the second part of the trial, regarding corruption and money-laundering, the prosecutors have demanded a seven-year sentence for Mr Balkany and a four-year suspended sentence with a €500,000 fine for his wife. Defence lawyers will plead next week.

Mr Balkany claimed he inherited large amounts of cash and gold ingots from late father Gyula, a Hungarian Jew who survived Auschwitz and made a fortune in ready-to-wear.

Mr Balkany blamed “the Swiss mentality” of his financial adviser for the numerous front companies created to shelter him from taxation. “He was supposed to manage everything, to create companies if he thought it was a good idea to create companies. The Swiss mentality is very curious. You shut one down, you open another . . . I never understood the purpose . . . I don’t want to be the scapegoat of all the French who had Swiss accounts.”

Mr Balkany denied owning the Dar Gyucy riad in Marrakech. The prosecutors said the name was a contraction of Gyula and Lucy, the couple’s grandchildren. Marc Angst, a Swiss financier, testified that Jean-Pierre Aubry, Mr Balkany’s right-hand man, told him he was covering for the mayor of Levallois when he purchased the riad in the name of a front company in 2009.

A Belgian businessman based in Democratic Republic of Congo contributed €5 million towards the purchase of the riad, via an account in Singapore. Another €2.75 million was paid by Mohamed Al-Jaber, a Saudi billionaire.

Al-Jaber several times lent his private jet to the Balkanys so they could travel to their villa on the West Indian island of Saint-Martin. Mr Balkany said he “didn’t want to hurt (Al-Jaber’s) feelings, but frankly, it’s more comfortable in a big plane”.

Mr Balkany claimed the riad was in fact owned by Al-Jaber, who had signed a €243 million contract to build two huge towers containing hotels and office buildings on the Seine in Levallois. Al-Jaber had a cash flow problem, so Mr Balkany extended the payment schedule. The towers were never built.

The Saudi millionaire wore a blue pin-striped suit in court and testified that Mr Balkany’s version of events was “One hundred per cent lies! . . . For me, buying a house is like marrying a woman. You cannot choose without having seen her.”

Al-Jaber boasted of owning property in eight countries and claimed to be “the only businessman in the gulf who is not corrupt!”

He asked for “punishment commensurate with the most serious attack on public probity, which is corruption”.