‘Iran did do it,’ Trump says of attack on oil tankers in Gulf of Oman 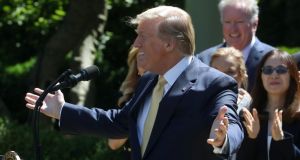 Tensions between the United States and Iran have escalated after Washington blamed Tehran for Thursday’s attack on two oil tankers in the Gulf of Oman.

“Iran did do it,” US president Donald Trump said in an interview with Fox News on Friday morning, echoing comments by secretary of state Mike Pompeo, who blamed Iran for the attack.

United States Central Command released video footage of what it claimed was an Iranian Revolutionary Guards boat pulling up beside the stricken oil tanker and removing a mine.

“That was their boat, that was them,” Mr Trump told Fox News. “And they didn’t want the evidence left behind.”

Mr Pompeo accused Iran of responsibility for the attack.

“This assessment is based on intelligence, the weapons used, the level of expertise needed to execute the operation, recent similar Iranian attacks on shipping, and the fact that no proxy group operating in the area has the resources and proficiency to act with such a high degree of sophistication,” he told reporters in Washington.

But Iran’s leadership denied any involvement in the attacks on Norwegian-owned Front Altair and the Japanese-owned Kokuka Courageous at the mouth of the Gulf.

“These accusations are alarming,” foreign ministry spokesman Abbas Mousavi said. President Hassan Rouhani also rejected the allegations. “The US government has turned into a serious threat to the stability of the region and the world over the past two years through misusing its economic, financial and military capacities,” he said.

Pictures from the scene showed at least one of the vessels in flames on Thursday. Crews on both ships were forced to evacuate.

The attacks were the latest incident in the region. Four ships, two of them owned by Saudi Arabia, were attacked last month off the coast of the United Arab Emirates. That prompted the United States to move an aircraft carrier and B-52 bombers to the region, with US national security adviser John Bolton directly blaming Iran for the attack.

The relationship between Iran and the US has deteriorated since Mr Trump’s election, with the US president making good on his campaign promise to take the country out of the 2015 Iran nuclear deal. Since then, however, there have been mixed messages from the administration about how to handle the Iranian threat.

Mr Trump has pushed back against suggestions that the US is moving closer to some form of intervention and wants regime change – something Mr Bolton previously advocated. But last year he warned Iran that it would “suffer consequences the like of which few throughout history have ever suffered before” if it threatened the US.

In his morning interview with Fox News, Mr Trump refused to be drawn on his next steps. Asked how he planned to respond to Iran, he replied: “We’re going to see,” though he warned Iran against closing the Strait of Hormuz,through which a significant chunk of the world’s oil is shipped. “If it closes, it’s not going to be closed for long. And they know it,” Mr Trump said.

He also appeared to equivocate on whether he was prepared to negotiate with Iran. “I’m ready when they are,” he said on Friday. “Whenever they’re ready it’s okay. In the meantime, I’m in no rush.” But a day earlier he said on Twitter that “it is too soon to even think about making a deal”, adding: “They are not ready and neither are we!”