Israel moves to lower tensions after air strikes on Hamas 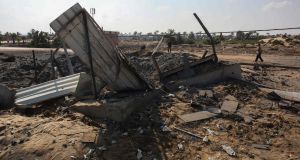 Dozens of incendiary balloons were released from Gaza on Friday towards Israel, causing at least seven fires on the Israeli side of the border. However, the weekly border protests were relatively restrained after Israel reportedly sent assurances to Hamas that the money it receives from Qatar would be transferred by the end of next week and the ban on Gaza fishing boats setting out to sea would be lifted.

Tensions were high after Israeli warplanes struck several Hamas military sites early on Friday, including a training base and naval compound. The strikes came after a rocket launched from Gaza on Thursday night hit a yeshiva Jewish seminary building in Sderot, the closest Israeli town to the Gaza border. The flare-up along the border came just weeks after a ceasefire was reached involving long-term arrangements to ensure quiet.

The mayor of Sderot urged the government to launch a ground offensive in response to the rocket fire.

The deal in early May, brokered by Egypt and the United Nations, ended the worst spate of violence between the sides since a 2014 war.

“There’ll be another [military] campaign in the Gaza Strip,” minister Yoav Gallant told Channel 13 News. “We will decide the timing and we will decide the conditions. And I will not play into Hamas’s hands when it is the one that wants this escalation,” he said.

Hamas spokesman in Gaza Hazem Kassem said the Palestinian factions were monitoring the situation with the mediators in order to restore the truce but he stressed that the resistance was prepared to retaliate for the “occupation’s aggression”.

The flare-up in violence began shortly after Israel announced on Wednesday that it had closed Gaza’s offshore waters to Palestinian fishermen until further notice in response to the launch of incendiary balloons that set fire to stretches of Israeli farmland.

Hamas accused Israel of failing to deliver on all the various elements of the truce arrangement, including the regular transfer of Qatari cash to the Gaza Strip.

A Qatari envoy had been expected in Gaza this week with stipends for needy families.

Israeli officials denied the Hamas claims and accused Hamas of exerting pressure on Israel because it believes that prime minister Binyamin Netanyahu, who faces another election in September, will be reluctant to launch a military offensive at this juncture against the militant groups.

Knesset member Alon Schuster from the opposition Blue and White party, himself a resident of a Gaza periphery kibbutz, said Israel had lost its deterrence.

“I don’t know how many dollars Netanyahu will send Hamas this time in exchange for more quiet. Netanyahu has abandoned the residents who live near the fence and has turned them into Israel’s flak jacket.”

1 Coronavirus: What will reopen in Ireland’s phases to ease restrictions?
2 Coronavirus: No new Covid-19 deaths reported in State for first time since March
3 Next government could bring in work-from-home tax incentives – Taoiseach
4 Swimming ban at Dublin's Merrion strand due to poor water quality
5 Unconvincing account may take some heat out of Dominic Cummings controversy
Real news has value SUBSCRIBE