Protests against bill were met with tear gas, and rubber bullets from police 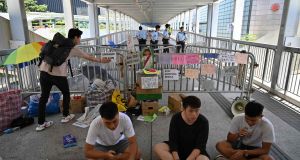 Demonstratoras against the extradition bill are seen while police stand guard near the Legislative Council Complex in Hong Kong. Photograph: Hector Retamal/AFP/Getty Images

Ms Lam said in a press conference that she took the decision in response to widespread public unhappiness over the measure, which would enable authorities to send some suspects to stand trial in mainland China.

Many in the former British colony worried that the move would further erode cherished legal protections and freedoms promised by Beijing when it took control in 1997.

A mass protest over the issue had been planned for Sunday.

Hundreds of thousands of Hong Kong residents took to the streets in demonstrations earlier this week. Protests turned violent on Wednesday, adding to pressure on Ms Lam to back down.

Ms Lam said the government would study the matter further.

She said: “After repeated internal deliberations over the last two days, I now announce that the government has decided to suspend the legislative amendment exercise.

“I want to stress that the government is adopting an open mind. We have no intention to set a deadline for this work.”

Ms Lam said she would “adopt a sincere and humble attitude in accepting criticism” over the government’s handling of the issue.

She had previously refused to withdraw the bill, and many protesters have demanded her resignation.

Many accuse China of extensive meddling since then, including obstruction of democratic reforms, interference with elections and of being behind the disappearance of five Hong Kong-based booksellers, starting in 2015, who specialised in works critical of Chinese leaders.

Beijing has denied that it has overreached in Hong Kong. –Reuters

1 Irish tourists excluded from visiting Greece and Croatia
2 Taoiseach has confirmed schools will reopen at the end of August
3 Quarantine will cease within fortnight, Ryanair CEO claims
4 Garda to scale down Covid-19 enforcement for June bank holiday
5 Covid-19: Pupils may be kept apart in groups and pods when schools reopen
Real news has value SUBSCRIBE