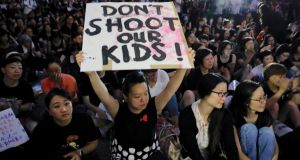 Hundreds of mothers protest against the amendments to the extradition law in Hong Kong on Friday, June 14th. Photograph: Vincent Yu/AP

One of Hong Kong’s most senior government advisers has said it is “impossible” to continue discussion of a controversial extradition Bill against a backdrop of violent clashes between protesters and authorities, in the first sign of a potential split among the city’s leadership.

“I personally think it is impossible to discuss [the Bill] given such a strong confrontation. It would be very difficult,” Bernard Chan, the most senior adviser to chief executive Carrie Lam, said in an interview on public radio station RTHK. “At the very least [the government] should not escalate the antagonism.”

The comments represent a marked departure from the stance of Ms Lam, who has insisted she will push ahead with the Bill in spite of the demonstrations which brought Hong Kong to a standstill as tens of thousands of protesters battled with police on Wednesday.

Mr Chan, who is also president of insurer Asia Financial, said he had underestimated the concerns of the business community and warned that the government might not have explained the Bill well enough.

Critics fear the proposed law would allow Beijing to seize anyone living in or transiting through the city on potentially trumped up charges. They believe the Bill would undermine Hong Kong’s “one country, two systems” framework, through which the territory enjoys legal autonomy and civil liberties that are unique in China.

Ms Lam, however, says the Bill is needed to plug a legal loophole to prevent the territory being used as a haven for criminal fugitives.

The protests forced the Legislative Council, Hong Kong’s de facto parliament, to suspend debate on the Bill. Legco has not yet set a new date to resume debate of the legislation, which was originally scheduled for a final vote next Thursday, and more demonstrations are planned for Sunday.

Separately, the Hong Kong Confederation of Trade Unions, which has more than 190,000 members in the territory, has urged workers to strike on Monday.

Mr Chan’s remarks came as China summoned a senior US diplomat in Beijing to lodge “solemn representations” over Washington’s “irresponsible” statements and actions about the extradition Bill.

“We urge the US to . . . immediately stop any form of interference in Hong Kong’s affairs and not do anything that would damage the prosperity and stability of Hong Kong,” said deputy foreign minister Yue Yucheng on Friday, according to Chinese state media.

US lawmakers have ratcheted up their pressure on the territory to shelve the extradition law. Members of the US Congressional-Executive Commission on China introduced legislation that would require the secretary of state to certify that Hong Kong remained autonomous from Beijing. A failure to do so would mean the city would lose certain trade privileges that the US does not offer Beijing.

Along with Mr Chan, comments by a number of Hong Kong lawmakers hint at a divergence of opinion among senior figures. “The government will consider all options. It is never a monolithic whole,” Lam Ching-choi, another top adviser to Ms Lam, told local media.

Michael Tien, a pro-business Hong Kong lawmaker and a member of the National People’s Congress, China’s rubber stamp parliament, urged the government to suspend the Bill.

“The people of Hong Kong are very worried about the situation. Moderate professionals, the middle classes, experts and scholars who have been less vocal in the past, are also generally worried,” he said.

A pro-Beijing lawmaker, Regina Ip, said she had not heard of any plans to withdraw the law but admitted the government faced difficult choices. “If the government caves in to violence and external influences, in the long run that would also make Hong Kong ungovernable,” she said.

Derek Yuen, a political scientist at the University of Hong Kong, said the comments from Mr Chan and other advisers showed they were trying to “distance or detach themselves from Carrie Lam and other supporters” of the Bill. – Copyright The Financial Times Limited 2019