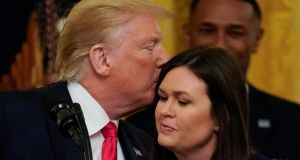 US president Donald Trump kisses White House press secretary Sarah Sanders after it was announced she will leave her job at the end of the mont. Photograph: Kevin Lamarque/Reuters

Two years since Sarah Huckabee Sanders first took to the podium in the White House press room, she has become the latest Trump appointee to leave the administration.

On Thursday, Donald Trump announced on Twitter – where else? – that Sanders will leave at the end of the month.

An emotional Sanders joined Trump shortly later at an event in the East Room. “I love the president,” describing her job as the “honour of a lifetime”, only surpassed by having her children. “I couldn’t be prouder to have had the opportunity to serve my country and particularly to work for this president. He has accomplished so much in these two and a half years . . . I’ve loved every minute, even the hard minutes.”

Perhaps more importantly for Trump, she also pledged to remain “one of the most outspoken and loyal supporters of the president and his agenda” after she leaves office.

The departure of Sanders represents the latest turnover in staff at the White House, but it also marks the exit of one of Trump’s most loyal lieutenants. The daughter of former Arkansas governor and Republican presidential candidate Mike Huckabee, Sarah Huckabee Sanders worked on the Trump election campaign, joining the White House as a press aide following Trump’s inauguration.

Sanders took over from Sean Spicer as press secretary in June 2017, after a short stint by Anthony Scaramucci as communications director.

....She is a very special person with extraordinary talents, who has done an incredible job! I hope she decides to run for Governor of Arkansas - she would be fantastic. Sarah, thank you for a job well done!

She soon became one of the most visible representatives of the Trump administration, fielding questions in the famous James Brady briefing room.

With her no-nonsense southern drawl she fiercely defended the president. But her tough demeanour masked a warmer personality and a personal connection with journalists which the public rarely saw. In the early weeks of her tenure she welcomed The Irish Times into her West Wing office, joking about the Irish Times watering-hole in Washington and discussing EU and other political matters.

But as the months went on the relationship between the press and the press secretary became increasingly toxic. A turning point was the White House correspondents’ dinner in April 2018 when comedian Michelle Wolf lambasted Sanders, who sat nearby. The episode ultimately led to the White House Correspondents’ Association scrapping a comedic act for the dinner.

An incident a few months later, when Sanders was told to leave a restaurant in Virginia with her family following customer complaints, illustrated just how deeply embedded she had become with the presidency she represented and refused to criticise.

As her boss intensified his attacks on the “fake news” media, she continued to defend him, making it clear that her loyalty was to Trump, not to the principle of transparency and communication. She later admitted to special counsel investigators that, in a “slip of the tongue”, she had falsely said that several FBI agents had supported the president’s decision to fire James Comey.

Tensions culminated with an incident at a White House press conference when CNN reporter Jim Acosta clashed with Trump. Sanders revoked his press pass. The White House then tightened its criteria for securing a “hard pass”, the coveted security-cleared pass that allows reporters to freely enter the White House.

But it is the demise of the daily press briefing that will define Sanders’ legacy. Under her tenure the decades-old tradition, which allowed news media to question the press secretary, has disappeared. Her last briefing was in March, and lasted barely 15 minutes.

The White House has justified this change by pointing out that the president regularly takes questions before his departures on the Marine Force One helicopter and on other impromptu occasions. But that allows the president to pick and choose which shouted questions he wants to hear, allowing him to shape the narrative as he does so deftly every day via Twitter.

Sanders’s next career step is not clear. Trump mentioned her as a possible candidate for governor of Arkansas, though that position will not be vacant until 2022. A true believer in the Republican cause – she is an evangelical Christian and strongly pro-life – she is likely to continue her involvement in party politics.

As for her successor, some of the names under consideration are deputy press secretary Hogan Ridley, special adviser Kellyanne Conway, or a Fox News personality.

There is another distinct possibility – Trump may choose not to fill the role. For a man who has successfully managed to shape the narrative by communicating directly to the world on Twitter, who needs someone to speak for him? In an increasingly authoritarian White House, Trump may believe that he is his best spokesman.