The US, UK and France have launched air strikes against targets at three sites in Syria following a week of threats of retaliation for an alleged chemical weapons attack on civilians in the Damascus enclave of Douma. Video: Reuters 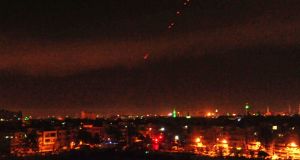 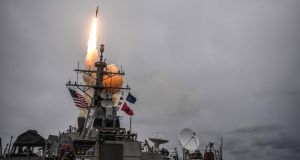 A handout photo file made available by the US Navy on 14 April 2018, shows the Arleigh Burke-class guided-missile destroyer USS Donald Cook (DDG 75) firing a standard missile 3 during an exercise at sea, in the Atlantic Ocean, 15 October 2017. Photograph: EPA

The United States, France and Britain have bombed a number of government installations in Syria, launching more than 100 missiles against targets they said were chemical weapons sites.

The strikes, which US defence secretary James Mattis described as “a one-off”, were in response to last week’s chemical weapons attack on the Syrian town of Douma, which killed up to 75 people.

An emergency session of the UN Security Council, called by Russia, was to meet at 4pm UK time regarding the strikes.

Russia proposed a draft United Nations Security Council resolution to condemn “the aggression against the Syrian Arab Republic by the US and its allies in violation of international law and the UN Charter”.

It was not immediately clear when it could be put to a vote. It was unlikely to get the minimum nine votes needed to force a veto by the United States, France or Britain, said diplomats. A resolution needs nine votes in favor and no vetoes by Russia, China, France, Britain or the United States to pass.

He said: “I urge all member states to show restraint in these dangerous circumstances and to avoid any acts that could escalate matters and worsen the suffering of the Syrian people.”

He said: “This is hooliganism in international relations, and not minor hooliganism given that we are talking about major nuclear powers.”

US ambassador to the UN, Nikki Haley, pointed out the meeting was the fifth this week on Syria. “The time for talk ended last night,” she said.

She said President Trump had told her that if there was further use of chemical weapons by Assad’s regime, the United States was “locked and loaded”.

Speaking in Downing Street on Saturday morning, Theresa May had described the operation as “a limited, targeted and effective strike with clear boundaries” that sought to avoid escalation and to prevent civilian casualties.

“Together we have hit a specific and limited set of targets. They were a chemical weapons storage and production facility, a key chemical weapons research centre and a military bunker involved in chemical weapons attacks. Hitting these targets with the force that we have deployed will significantly degrade the Syrian Regime’s ability to research, develop and deploy chemical weapons,” she said.

Ms May stressed the specific nature of the message the operation was intended to send, declaring that the air strikes were not an attempt to interfere in Syria’s civil war or to topple the regime of Bashar al-Assad. But she said the action should deter all countries from using chemical weapons, linking it to the poisoning of former Russian spy Sergei Skripal and his daughter Yulia in Salisbury last month.

“Although of a much lower order of magnitude, the use of a nerve agent on the streets of the UK in recent weeks is part of a pattern of disregard for these norms. So while this action is specifically about deterring the Syrian regime, it will also send a clear signal to anyone else who believes they can use chemical weapons with impunity,” she said.

Syrian state television said that government forces had shot down more than a dozen missiles, and claimed that only the research facility in Damascus had been damaged. Russian president Vladimir Putin described the airstrikes as an “act of aggression” that would worsen the humanitarian crisis in Syria.

Ms May said she will make a statement in Parliament on Monday but Labour leader Jeremy Corbyn said she should have sought prior approval for an action he described as legally questionable.

“Britain should be playing a leadership role to bring about a ceasefire in the conflict, not taking instructions from Washington and putting British military personnel in harm’s way. Theresa May should have sought parliamentary approval, not trailed after Donald Trump. The Government should do whatever possible to push Russia and the United States to agree to an independent UN-led investigation of last weekend’s horrific chemical weapons attack so that those responsible can be held to account,” he said.

In a statement issued by the Russian Embassy, Vladamir Putin said the US used as a pretext a “staged chemical attack against civilians”.

“Having visited the site of the would-be chemical attack, Russian military experts did not find any traces of chlorine or any other toxic agent,” he said.

“The Organisation for the Prohibition of Chemical Weapons dispatched its experts to Syria in order to investigate all the circumstances. However, in a sign of cynical disdain, a group of Western countries decided to take military action without waiting for the results of the investigation.”

He said Russia “condemns in the strongest possible terms the attack against Syria, where Russian military personnel are assisting the legitimate government in its counterterrorism efforts”.

“Through its actions, the US makes the already catastrophic humanitarian situation in Syria even worse and brings suffering to civilians.”

“The current escalation around Syria is destructive for the entire system of international relations,” he said. “Russia will convene an emergency meeting of the UN Security Council to discuss the aggressive actions by the US and its allies.”

In a televised address from the White House to announce the strikes, Donald Trump said the US and its allies would strike again if there were more chemical weapons attacks by the regime of Bashar al-Assad.

“We are prepared to sustain this response until the Syrian regime stops its use of prohibited chemical agents,” he said.

“These are not actions of a man, they are crimes of a monster instead.”

After Trump finished his seven-minute address, Theresa May and Emmanuel Macron made separate announcements of British and French participation, stressing that the strikes were limited to Syrian regime chemical facilities, and had no wider goals.

Explosions were reported in Damascus moments after Trump’s address. Later a Syrian official said all sites had been evacuated “days ago” after a warning from Russia.

None of the air strikes hit zones where Russian air defence systems protect the Russian bases of Tartus and Hmeimim, Russian news agencies cited the ministry of defence as saying.

The Pentagon said in the immediate aftermath of the strikes that while there had been some Syrian air defence fire, it was not clear whether Russian air defences in Syria had gone into action.

The attack came on the eve of a planned visit by inspectors from the Organisation for the Prohibition of Chemical Weapons (OPCW) to the site of last week’s chemical weapons attacks, the Damascus suburb of Douma.

The US, UK and France had announced they had reached their own conclusion that the Syrian regime was responsible, an accusation denied by Damascus and Russia, which claimed on Friday the attack had been staged by British intelligence.

The White House produced a summary of the evidence it said pointed to the regime’s responsibility for the Douma attack. It said that regime helicopters were seen by witnesses hovering over the area of the attack on April 7th, dropping barrel bombs. Remnants of the barrel bombs looked like “chlorine barrel bombs from past attacks”. It said that the victims showed symptoms of both chlorine and sarin poisoning.

The White House assessment also claimed there was “reliable information indicating coordination between Syrian military officials before the attack.”

Trump said the Douma attack was “a significant escalation tripartite aggression in in a pattern of chemical weapons use by that very terrible regime.” He noted that establishing deterrence against use of such weapons represented “a vital national security interest of the US”.

Macron confirmed that France was involved in the air strikes, saying the French role would be limited to Syria’s chemical weapons facilities.

“We cannot tolerate the recurring use of chemical weapons, which is an immediate danger for the Syrian people and our collective security,” a statement from the Elysee presidential office said.

As light dawned in Damascus on Saturday, hundreds of Syrians gathered at landmark squares, honking their car horns, flashing victory signs and waving Syrian, Russian and Iranian flags in scenes of defiance. “We are your men, Bashar,” they shouted.

Syrian state TV broadcast live from Omayyad square where a large crowd of civilians mixed with men in uniforms, including an actor, lawmakers and other figures. “Good morning steadfastness,” one broadcaster said.