More than 1,000 children taken by Boko Haram since start of Nigerian conflict in 2009 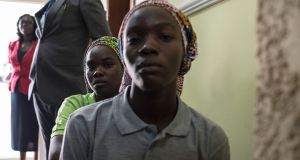 Some of the released Chibok girls on May 8th, 2017. They were among 276 schoolgirls kidnapped in 2014 from a secondary school in Chibok, northeast Nigeria. Some 112 still remain in captivity. Photograph: Getty Images

It has been four years since the kidnapping of 276 schoolgirls from Chibok in northeastern Nigeria, and activists in the capital Abuja are still holding a daily sit-out for those still held captive.

“The current situation is quite pathetic,” said Aisha Yesufu, a local businesswoman and one of the protest’s most regular attendees. “It’s sad to say 112 schoolgirls have spent four years in captivity just for daring to be educated. When we tell the girl child to dare to dream, to aspire, to shatter glass ceilings, she knows that it’s a lie. She has seen her sisters who did just that abandoned in captivity.”

Thousands of women have been abducted by Boko Haram militants since the group launched an insurgency in 2009, occupying villages across Nigeria’s northeast with the aim of creating an Islamic caliphate.

Between 2014 and 2015, the group controlled territory roughly the size of Belgium, before an army offensive forced them back.

Though government forces and politicians have repeatedly declared victory over Boko Haram – one faction of which has an allegiance with Islamic State – militants remain active across the northeast. This was painfully obvious when in February 110 schoolgirls were kidnapped from the town of Dapchi. All were later released except one, who refused to convert from Christianity, and five who died in captivity.

Around a dozen of the Chibok girls are believed to have died. Of those, at least five were killed by Nigerian military air strikes, according to testimony from former captives given to The Irish Times. Some 112 still remain in captivity.

More than a dozen of those who escaped earlier have ended up in the US.

Emmanuel Ogebe, a Nigerian human rights lawyer who was involved in bringing some to America, said that several are now in university.

“The fourth anniversary of the Chibok abductions is a bitter milestone that was inconceivable at the onset of the attack,” he said. “We remember the missing Chibok girls and also now the captive Christian schoolgirl from Dapchi, Leah Sharibu, held back for her faith.”

Orphans, we either take care of them today or they’ll be the disaster that is going to consume everyone.

In Nigeria’s northeast, civilians are becoming accustomed to trauma. There’s no culture of migration from this region, and many locals say they could never imagine leaving. They’re willing to live through the threat of bombings and attacks if it means they can stay among their families.

While freed Chibok girls are helped by the government, the fates of other escapees paint a more complex picture of why people join Boko Haram. For many women, growing up in a patriarchal and poor society, life with the militants gave them their first taste of power. At least one former wife of a commander, Aisha, returned to the bush after going through a government-supported deradicalisation programme.

As many as 40,000 orphans have been created by the conflict. “The only parent they have is the government,” said Ahmed Jaha, the commissioner of higher education in Borno State, while arguing it was necessary to build “megaschools for orphans”.

“Orphans, we either take care of them today or they’ll be the disaster that is going to consume everyone.”

Since the conflict started in 2009, at least 2,295 teachers have been killed and more than 1,400 schools destroyed, according to Unicef. Disused schools still offer a sanctuary for the displaced, who sleep in tents in schoolyards and sit inside buildings for shade during the day.

Unicef says more than 1,000 children have been abducted by Boko Haram since the start of the conflict, but speaking to people displaced by the conflict it appears that the number is far, far greater.

Children have been caught up on all sides of the war. Last summer one member of the CJTF, a Borno State-based vigilante group that fights Boko Haram, told The Irish Times it was common for children to serve in its ranks.

“There is no age barrier to the fighting,” he said. “A small boy will ask you to fight, you ask him why, and he says Boko Haram killed his father and his mother. They only way he can be happy is to let him fight. There is no way to stop him.”

In incidents previously documented other children have been sold to Boko Haram as wives or suicide bombers. The going rate is between 100,000 and 200,000 naira (€225 and €450), said one woman, who lived in Boko Haram territory for nearly a year.

This is a war that has torn apart families. Husbands reject wives after they’ve been kidnapped and raped; parents reject children who’ve converted to Islam; schoolmates condemn friends who joined Boko Haram for financial profit.

Across the northeast many Nigerians laugh bitterly when you mention the Chibok kidnapping, keenly aware that so many more women and children have suffered and continue to suffer because of Boko Haram.

However, Yesufu says the outcry over what happened to those schoolchildren extends to everyone else who has had their lives turned upside down by this intractable war. “[The] Chibok girls are a representation of all that were abducted before and after them,” she said. “Many are in captivity. The state is not even aware of the magnitude. As long as anyone is in captivity we all are in captivity.”