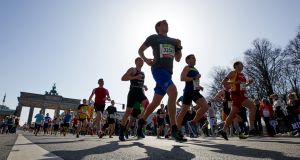 Runners participate in the Berlin Half Marathon 2018, in Berlin. Photograph: Jeon Hayoung/EPA

Six people have been detained in connection with what police and prosecutors allege was a plan to carry out an extremist attack on Berlin’s half-marathon, German authorities said.

Berlin police said in a statement they had detained suspects aged between 18 and 21 after searches in the districts of Charlottenburg-Wilmersdorf and Neukoelln in the capital. They tweeted that six people were detained in co-operation with the city’s prosecutor’s office.

“Because of the ongoing investigation, no further information can be given at the present time,” the police added in their statement.

The main suspect allegedly knew Anis Amri, a Tunisian who killed 12 people and injured dozens more when he drove a truck into a Christmas market in

Berlin in December 2016, Die Welt reported. One of the apartments

Berlin police raided before the race started on Sunday was also searched after the Christmas market attack, the newspaper said.

In its unsourced report, Die Welt said the main suspect was known to Amri and had planned to stab to death spectators and runners at the half-marathon.

The suspect had in his possession two knives which had been especially sharpened for this purpose, the report said.

A record of 36,000 athletes entered the 38th edition of the Berlin half-marathon, the biggest in Germany.

Thousands of people lined Berlin streets to watch the event, which ended with no reported incidents.

Kenyan Erick Kiptanui clocked a course record of 58 minutes, 42 seconds, equalling the fastest time in the world this year, the race’s organisers said on their website.

Amri’s attack in Berlin in 2016 prompted German lawmakers to call for tougher security measures. No major Islamist militant attack has been carried out in Germany since.

Earlier on Sunday, interior minister Horst Seehofer said the government would do everything possible to protect citizens, but added: “We have again experienced that . . . absolute security is unfortunately not possible.”

Seehofer was speaking in Münster, where a man drove a camper van into a group of people sitting outside a restaurant on Saturday, killing two of them before shooting himself dead. Authorities have said the attacker was a 48-year-old German citizen with mental health problems and that there was no indication of an Islamist militant connection.-Reuters