‘I have agreed with historically co-operative, disciplined approach we engaged in with Mueller’ 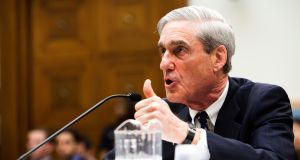 Robert Mueller, appointed by the justice department, is investigating alleged Russian meddling in the 2016 US presidential election and whether the Trump campaign colluded with Moscow. File photograph: Christopher Gregory/New York Times

US president Donald Trump, who has repeatedly condemned as a “witch hunt” a federal inquiry into possible collusion between Moscow and his presidential campaign, said on Thursday he backed a “co-operative” approach to the Russia investigation.

“I have agreed with the historically co-operative, disciplined approach that we have engaged in with Robert Mueller, ” Mr Trump said in a Twitter message, referring to the special counsel leading the investigation.

Mr Mueller, appointed by the justice department, is investigating alleged Russian meddling in the 2016 election and whether the Trump campaign colluded with Moscow.

Russia denies US intelligence agencies’ findings that it interfered in the campaign to try to tilt the vote in Mr Trump’s favour. Mr Trump has denied any collusion and has repeatedly attacked Mr Mueller’s investigation as politically motivated.

Mr Trump’s irritation erupted again this week after an FBI raid targeting his personal lawyer, Michael Cohen, which followed a referral by Mr Mueller. This raised concerns among critics and politicians, including some in Mr Trump’s own Republican Party, that he might try to have Mr Mueller removed.

White House lawyers Ty Cobb and Donald McGahn have told Mr Trump that firing Mr Mueller would leave him vulnerable to charges of obstruction of justice, two officials told Reuters on Tuesday. They said he must have “good cause” to order the justice department official overseeing the Russia inquiry, deputy attorney general Rod Rosenstein, to oust Mr Mueller.

Mr Cobb, the lawyer in charge of the White House response to the Russia investigation, has stressed co-operation with Mr Mueller. The White House has said it has turned over tens of thousands of pages of documents to the special counsel’s team.

Mr Trump said in one of his Twitter messages on Thursday that he had full confidence in Mr Cobb.

A bipartisan group of senators put forward legislation on Wednesday to protect Mr Mueller and his investigation, which the Senate judiciary committee will consider next week.

“Anyone advising the president – in public or over the airwaves – to fire Bob Mueller does not have the president or the nation’s best interest at heart. Full stop,” Republican Senator Orrin Hatch wrote on Twitter on Thursday. – Reuters