Trump’s nominee for secretary of state, seen as foreign policy hawk, vows to save Iran deal 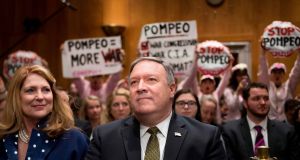 Protesters chant with placards as US secretary of state nominee Mike Pompeo arrives to testify before the Senate Foreign Relations Committee during his confirmation hearing on Capitol Hill in Washington, DC on Thursday. Photograph: Jim Watson/AFP/Getty Images

Donald Trump’s nominee for secretary of state vowed to make the US a world leader in global diplomacy and help a demoralised state department find “its swagger once again” during his confirmation hearing on Thursday.

Mr Trump nominated Mike Pompeo, who is director of the CIA, after sacking his former secretary of state Rex Tillerson, who had failed to develop a good working relationship with the president, state department staff or the press.

Mr Pompeo, if confirmed, would take charge at a time when the Trump administration faces pressing decisions over Syria, Iran and North Korea. The state department is also struggling with numerous vacancies and the threat of cuts to a third of its budget, prompting current and former officials to bemoan the collapse of US diplomacy.

A smiling Mr Pompeo arrived at the Senate hearing room to protesters from anti-war group Code Pink, who jumped up to chant: “No Pompeo! No more war!”

Widely seen as a foreign policy hawk, Mr Pompeo said he favoured diplomacy over war and would seek all available remedies to save an enfeebled multi-party nuclear deal with Iran. Mr Trump has said he will abandon the accord by May 12th, if his team cannot fix what Mr Pompeo described as its “most egregious flaws”.

“If confirmed, it will be an immediate personal priority to work with those partners to see if such a fix is achievable,” he said.

Mr Pompeo’s commitment to saving the Iran deal contrasts with his previous statements, including one on Twitter after Mr Trump won the 2016 election that said he looked forward to “rolling back this disastrous deal”.

He said he was not advocating regime change in North Korea and that the administration would “continue to take real actions to push back” on Russia to reset relations. He promised to work with China to produce a “more productive bilateral relationship”.

Under terse questioning from Bob Menendez, the ranking Democrat on the Senate foreign relations committee, Mr Pompeo said he had co-operated with special counsel Robert Mueller on his investigation into Russian election meddling. But he declined to comment on his testimony or what he said were “private conversations” he had had with Mr Trump.

While Mr Pompeo was silent on the proposed budget cuts in his opening testimony, he said he wanted to work quickly to fill state department vacancies. He said his first priority would be to make sure state department officials were “empowered” and that they have a “clear understanding” of the president’s mission.

Mr Pompeo has spent the past weeks meeting former ambassadors and high-ranking state department officials, including Obama-era secretary of state and defeated presidential candidate Hillary Clinton as he seeks to rebuild the confidence of diplomats and civil servants.

“He has a positive record at the CIA and there’s a lot of hope inside [the state department] that he’ll defend their budget, revitalise diplomacy and make state into the power it has to be alongside the Pentagon and our intelligence agencies,” said Nicholas Burns, a former senior state department official. He added that Mr Pompeo had been “very smart” about preparing for the job and seeking to reassure the “neglected” rank and file.

But, if confirmed, Mr Pompeo would still face an uphill task of connecting with some state department officials, who found his opening testimony superficially appealing and worry about his commitment to reviving a much-depleted state department.

“[He] seems to be trying to rewrite and take control of his narrative,” said a serving state department official, adding that his testimony seemed a calculated attempt to distance himself from Mr Tillerson. “How much of it is genuine, I don’t know.”

A Harvard-educated lawyer, former businessman and Kansas congressman, Mr Pompeo graduated top of his class at West Point military academy. Senator Pat Roberts, opening the hearing, said his “Kansas common sense” would serve him well in working with other people.

Mr Pompeo secured support from 14 Democrats at his confirmation for CIA director, which he won on a 66-32 vote. – Copyright The Financial Times Limited 2018