Tensions between Washington and Moscow reached fever pitch as Donald Trump warned that the US was about to launch a missile strike on Syria. 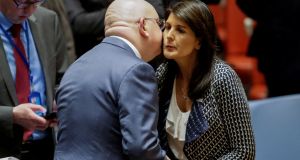 Nikki Haley, US ambassador to the UN greets her Russian counterpart Vasily Nebenzya. The US, Britain and France have blamed the chemical weapons attack on Syrian president Bashar al-Assad. Photograph: Reuters/Eduardo Munoz

Britain has rejected as a “grotesque, blatant lie” a Russian claim that London helped to fake last week’s chemical weapons attack in the Syrian town of Douma, as plans for western military action against Syria remained uncertain.

United Nations weapons inspectors arrived in Syria on Friday to investigate the attack, which the United States, Britain and France have blamed on Syrian president Bashar al-Assad.

France and Britain have signalled their willingness to take part in military action against Syria but the US ambassador to the UN, Nikki Haley, said the US president Donald Trump had yet to decide whether to launch strikes.

“Our president has not yet made a decision about possible action in Syria. But should the United States and our allies decide to act in Syria, it will be in defence of a principle on which we all agree,” she said.

Speaking before a UN Security Council meeting on Syria, Ms Haley claimed that Mr Assad had used chemical weapons against his own people more than 50 times since the war there began seven years ago.

But a Russian military spokesman claimed Moscow had evidence that Britain had worked with the volunteer rescue force, the White Helmets, to fake the chemical attack.

“We know for a fact that on April 3rd-6th, there has been strong pressure exactly from London on representatives of the so-called White Helmets for the prompt execution of the pre-planned provocation,” the spokesman said.

Britain’s ambassador to the UN, Karen Pierce, dismissed the claim, saying that Britain played no role in the attack.

“This is grotesque, it is a blatant lie, it is the worst piece of fake news we’ve yet seen from the Russian propaganda machine,” she said.

Washington has sent mixed signals about an imminent attack in recent days, amid reports of disagreement between the Pentagon and the White House about the targets for air strikes. Defence secretary James Mattis has warned of the danger of an escalation of the conflict if any military action affects Russian or Iranian forces in Syria.

“Increasing tensions and the inability to reach a compromise in the establishment of an accountability mechanism threaten to lead to a full-blown military escalation,” he said.

French president Emmanuel Macron, an early supporter of a military response to last week’s attack,raised concerns about the deterioration of the situation in Syria in a phone call with Russian president Vladimir Putin. Afterwards, Mr Macron called for dialogue with Russia to be maintained and stepped up to bring peace and stability to Syria.

British prime minister Theresa May came under growing pressure from MPs in her own party on Friday to subject any decision to attack Syria to a vote in parliament next week. Former attorney general Dominic Grieve warned that failure to win the backing of MPs could leave the prime minister exposed if anything goes wrong in a military operation.

“If it all goes terribly wrong then the government will be in difficulties. It will then have chucked at it that it hasn’t consulted parliament. The pressure on government to hold a debate in government time is going to become overwhelming. It has to be reasonable and take parliament into its confidence. Parliament can’t just be left sitting on the sidelines,” he said.

Labour leader Jeremy Corbyn said that whoever was responsible for the attack in Douma should be held to account but that any action should come after the UN investigates.

Beirut explosion: 78 people dead, nearly 4,000 injured 06:37
‘This was like a nuclear bomb’: More than 2,700 injured in Beirut explosion 00:04
Deluge of appeals expected after predicted grades handed out in Scotland 22:48
Europe braces for Covid-19 wave as Spain records 8,500 new cases over weekend 20:07
Whereabouts of Spain’s ex-king Juan Carlos shrouded in mystery 19:33