Investigation launched into Unrwa over alleged nepotism and discrimination 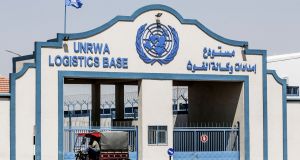 A Palestinian man rides a vehicle in front of an Unrwa building in Rafah, in the southern Gaza Strip, on Tuesday. (Photograph: Said Khatib/AFP/Getty Images

Senior figures at the UN agency for Palestinian refugees have been accused of serious ethical abuses, including nepotism, according to an internal review.

“Credible and corroborated” allegations were made last year in a confidential internal ethics report by and about the United Nations Relief and Works Agency (Unrwa), according to the Agence France-Presse news agency, which obtained the document.

The review included accusations against management of “nepotism, retaliation, discrimination and other abuses of authority, for personal gain, to suppress legitimate dissent, and to otherwise achieve their personal objectives”.

Unrwa’s top official, the commissioner general, Pierre Krähenbühl, was accused of appointing as an adviser a woman with whom he was romantically involved. The pair travelled on business class flights across the globe, it added.

Separately, another staff member – not named by AFP – was accused of bullying and of manipulating the system to find a well-paid job for her spouse. She has since left Unrwa for “personal reasons”, the humanitarian agency said. Another senior official, who is also no longer employed at Unrwa and was also not named by AFP, is described in the report as acting like a “gangster”.

After the submission of the confidential ethics review, the United Nations Office of Internal Oversight Services launched an investigation. Unrwa is already facing a crisis after the US cut hundreds of millions of dollars in funding.

Unrwa said Mr Krähenbühl had instructed all staff to fully co-operate with the inquiry. “The investigation is ongoing and no findings have been shared with Unrwa. The agency cannot comment on an ongoing investigation, and everything circulating now, including in the media, is ‘allegations’ and not findings.”

Mr Krähenbühl said: “If the current investigation – once it is completed – were to present findings that require corrective measures or other management actions, we will not hesitate to take them.”

Mr Krähenbühl did not address the specific allegations related to his own conduct. Unrwa said he was bound by the rules of the investigation and therefore could not comment publicly on the allegations against him during the inquiry.

Unrwa was established in the aftermath of the 1948 war surrounding the creation of Israel, when more than 700,000 Palestinians were forced out of or fled their homes. Palestinian refugees and their descendants across the Middle East, now numbering more than five million, rely on the Unrwa for healthcare, schooling and social services.

The agency employs about 30,000 people, mostly Palestinians, but it has been threatened with closure after severe aid cuts implemented by the Trump administration.

Israel has long rejected the claim that millions of Palestinians should be regarded as refugees, which affords them a right to return to land in modern-day Israel.

Since he entered office, Donald Trump has implemented multiple policies seen as detrimental to Palestinians, including recognising Israel’s claim to the contested city of Jerusalem.

In its statement, the Unrwa said it was “probably among the most scrutinised UN agencies in view of the nature of the conflict, and the complex and politicised environment” it was working in. – Guardian/AFP