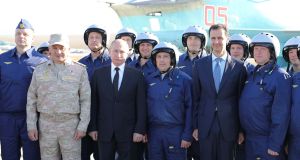 Russian president Vladimir Putin’s visit to his country’s Khmeimim air base in Syria should have been no surprise. Putin has repeatedly declared his intention to scale back Russia’s military presence in Syria since last December, when the Syrian army and its allies captured eastern Aleppo from a collection of often sparring armed groups.

In mid-March, Russia began a staged withdrawal but retained enough aircraft and troops to support the Syrian army in Damascus’s drive to restore Syrian sovereignty over the entire country, the ultimate objective of both Putin and Syrian president Bashar al-Assad. The government currently controls about 65 per cent of the country.

Last week, Putin said Islamic State, the main target of the post-Aleppo campaign, had been defeated on both banks of the Euphrates river and major combat operations in Syria were over, although the terror group still held pockets of territory.

Subsequently, the Russian defence ministry adopted a triumphalist tone, proclaiming all armed Islamic State groups on Syrian territory had been destroyed and the territory liberated.

Liberation is, however, not quite complete. Russian war planes have been in action against Islamic State fighters in northeast Hama province and provided air cover for Syrian troops and allies advancing on the strategic Abu al-Dhour military airport in northwest Idlib province, the last bastion of al-Qaeda’s Jabhat Fatah al-Sham and other radical groups, including Islamic State.

Although it has been declared a “deconfliction” or ceasefire zone, the presence in Idlib of al-Qaeda and Islamic State, branded “terrorist groups” excludes them from ceasefires.

Once Idlib is cleared of insurgents, Russia could try to broker a deal between Damascus and the US-backed, Kurdish-dominated Syrian Democratic Forces (SDF), to extend Syrian sovereignty over the 25 per cent of territory controlled by the SDF.

Russia courted the SDF by providing air and ground support to its fighters battling Islamic State remnants east of the Euphrates river with the aim of cleansing the border with Iraq of these elements. Moscow also pledged to support the Kurds when the US was, reportedly, preparing to abandon them.

Putin’s aim is to restore Russia’s political and military influence in the region, which was lost when the Soviet Union collapsed. Putin flew from Syria to Cairo, where he met Egypt’s president Abdel Fattah al-Sisi, and signed an agreement to build a nuclear power plant in that country. Egypt and Syria were once the Soviet Union’s chief regional allies.