Three charged in Malta over murder of anti-corruption journalist 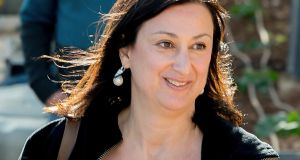 Daphne Caruana Galizia: A close friend said that she did not think the journalist had ever investigated the three men charged on Tuesday. Photograph: Jon Borg/AP

Caruana Galizia died instantly when her car was blown up as she drove out of her home on October 16th, a killing that shocked Malta and raised concern within the European Union about the rule of law on the Mediterranean island. All three pleaded not guilty at the arraignment, which was attended by her husband, Peter Caruana Galizia.

The men were named as Vince Muscat and brothers Alfred and George Degiorgio. It was not immediately clear whether police thought they had acted on their own or were hit men working for others.

Caruana Galizia wrote a popular blog in which she relentlessly highlighted cases of alleged graft targeting politicians of all colours, including prime minister Joseph Muscat. Vince Muscat was not a relative.

Police arrested 10 men on Monday in connection with their investigation into the killing. The other seven were released on bail.

A close friend of Caruana Galizia told Reuters that she did not think the journalist had ever investigated the three men charged on Tuesday.

“She wrote about government officials, politicians and wealthy business types,” the friend said, declining to be named because of the sensitivity of the case.

The Malta government had offered a €1 million reward leading to information on the murder. It also called in the US Federal Bureau of Investigation and Europol to assist in investigations.

Maltese media said investigators had homed in on the suspects following telephone intercepts known as triangulation data – that included the call from a mobile phone which triggered the car bomb.

Malta, the smallest nation in the European Union, has been engulfed by a wave of graft scandals in recent months, including accusations of money laundering and influence peddling in government – all of which have been denied.

Caruana Galizia exposed many of these cases and was loved by her readers as a fearless, anti-corruption crusader. Critics saw her as a muck-raking fantasist and she had been hit with 36 libel lawsuits in the nine months preceding her death.

Much of her criticism was levelled against the prime minister, Mr Muscat, and his leftist Labour party, which won power in 2013 after a nearly quarter of a century of uninterrupted rule by the conservative Nationalist Party.

In the months before her death, she had also regularly targeted senior Nationalist figures.

Italian newspapers have speculated that she might have fallen foul of men who were making a fortune by smuggling fuel out of Libya. However, her friend said she had never looked into the illegal trade and any mention of it in her blog related to articles already published elsewhere. – Reuters