Putin orders start of withdrawal of Russian troops in Syria

On surprise visit to Russian base, president says ‘significant part’ of troops will pull out 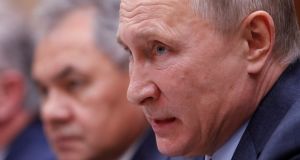 Russian president Vladimir Putin: “If the terrorists again raise their heads, we will deal such blows to them they have never seen,” he said in remarks carried by Russian news agencies. Photograph: Sergei Karpukhin/Reuters

Russia’s president, Vladimir Putin, made a surprise visit to Syria on Monday and ordered the Russian military to begin a partial withdrawal from the war-torn Middle Eastern country.

Mr Putin was met by Mr Assad as he arrived at the Khmeimeem aerodrome in eastern Syria’s Latakia region, which Russia has used as a military base since intervening in the conflict in September 2015.

Russia, together with the Syrian army, had succeeded in “smashing the most capable group of international terrorists” in just over two years, Mr Putin said in a televised speech to Russian troops assembled on the tarmac to greet him.

“In this connection I have have taken the decision: a significant part of the Russian military contingent deployed in the Syrian Arab Republic will come home to Russia . . . The motherland awaits you friends. Have a safe journey and thank you for your service.”

Russia would keep its military base at Khmeimeem as well as a naval facility at Tartus on the Syrian Mediterranean and would be ready to strike back at Islamnic State, also known as Isis, if the terror group ever “raised their heads” again, Mr Putin said.

His visit to Syria followed a Russian defence ministry announcement last week that Islamic State had finally been driven out of Syria after an “unprecedentedly” heavy Russian air bombardment near the border with Iraq.

Iraq also said it had completed the liberation of its territory from Islamic State on Saturday.

Mr Putin ordered the offensive in Syria in 2015, committing his air force to go to the rescue of Mr Assad as Islamic State, taking advantage of the civil war raging in the country, seized huge swathes of territory.

The US-led coalition engaged in a separate battle against Islamic State in Syria, and claims that Russia focused attacks on Syrian opposition groups that have been fighting to overthrow Mr Assad since a civil war erupted in 2011, rather than on Islamic State.

But there’s no doubt that the Russian campaign turned the tide of the war decisively in Mr Assad’s favour, allowing the Syrian army together with the Iranian-backed Hizbullah militant group to reclaim lost ground.

Mr Putin’s military intervention in Syria has enabled Russia to regain influence in the Middle East lost after the Soviet Union’s demise and play a decisive role in United Nations-led peace talks under way in Geneva.

Yet many Russians remembering the terrible cost of the Soviet invasion of Afghanistan in 1979, are fearful that their country might once again become embroiled in a long and bloody military campaign.

Mr Putin’s announcement of a partial withdrawal from Syria would serve as a useful “decoration” in his campaign for a fourth term in office at Russia’s presidential election next March, said Mikhail Magid, a Middle East expert at the Russian Academy of Sciences. But there was a risk that peace talks would fail, prompting Mr Assad and his Iranian allies to launch a fresh assault on Syrian opposition fighters. “There is a smell of a big war in the Middle East,” he told a round table at the Rosbalt news agency in Moscow.