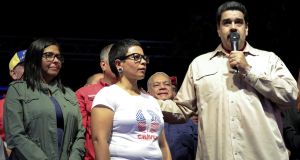 President Nicolás Maduro has set his sights on Venezuela’s 2018 presidential election after the ruling Socialist Party as predicted dominated mayoral polls with the help of a partial boycott by a crumbling opposition.

The 55-year-old successor to Hugo Chávez, enjoying a political breather after a year of ferocious domestic protests and damaging foreign sanctions, said the government had won at least 90 per cent of the 335 mayorships in Sunday’s election.

The latest official results gave him 21 of 23 state capitals as well as Caracas’s main district, with full results set to be announced later on Monday. No one doubted the socialists’ big win, given three of the biggest opposition parties were not fielding candidates.

The elections left Mr Maduro the favourite to be the Socialists’ candidate in next year’s presidential race despite the ambitions of rivals within the government and an economic crisis that has pummelled the Opec nation since his 2013 election.

“We’re ready to compete!” he told cheering supporters in a Caracas square shortly before midnight on Sunday, next to a statue of Venezuela’s independence hero Simon Bolivar.

“2018 belongs to the ‘Chavistas’,” Mr Maduro said, using the ruling movement’s name after his popular mentor and predecessor.

He also declared fixing Venezuela’s broken economy a priority. But opponents and even some government dissenters say it is his stubborn adherence to Chávez-era economic policies, such as currency controls, that is to blame for the crisis.

Venezuela’s 30 million people are enduring one of the worst economic meltdowns in Latin American history. Millions are skipping meals, missing medicines and lining up for hours at shops during acute shortages and crippling inflation.

Venezuela’s opposition coalition scoffed at Sunday’s vote as a Pyrrhic victory for Mr Maduro. “Irregularities and low turnout characterised the vote,” the coalition said in a statement. It is demanding reforms to the electoral system for the 2018 vote.

But there was no co-ordinated response among members of the coalition, which has succumbed to infighting, and the road ahead looked bleak. “This is the worst result for the opposition in any election during the ‘Chavista’ era,” said pollster Luis Vicente Leon.

“They are not highlighting that they have delegitimised the [electoral] process and they’ve abandoned municipalities, which are fundamental for the support base of the opposition.”

Participation was 47 per cent, the election board said.

Three of the coalition’s main parties – Popular Will, Justice First and Democratic Action – boycotted Sunday’s polls, saying the election board was at the service of Mr Maduro’s “dictatorship” and turning a blind eye to abuses by the state.

But other opposition parties did put up candidates, adding to confusion and acrimony within opposition ranks.

Mr Maduro said the three abstaining parties should be banned from participating in future elections.

The presidential election has traditionally been held in December, but there is speculation it will be brought forward to the first half of 2018 so the Socialists can take advantage of the opposition’s disarray.

With its most popular leaders barred – Leopoldo Lopez is under arrest and Henrique Capriles is prohibited from office – the opposition may struggle to find a popular flagbearer. Uniting the disparate parties and reigniting enthusiasm among despondent grassroots supporters will also be huge challenges.

Yet after facing down demonstrators, pushing through a controversial legislative superbody in a July vote also boycotted by the opposition, and notching a majority in October gubernatorial polls, Mr Maduro has ridden out the storm for now.

“I think the current government can fix things if they are allowed to get on with it,” said mechanic Melix Jordan (56), voting for the government in a rural part of Paraguana.

Social discontent is running deep, however, and political analysts say Venezuela is fertile territory for a third-way candidate in 2018. But there is no sign so far of an alternative presidential candidate despite calls in some quarters for popular billionaire businessman Lorenzo Mendoza to run.

“My vote maybe doesn’t change anything,” said gardener Hector Machado (64), who voted for the opposition in Tachira state. “But I still have hope for something better next year. The government has to understand how bad things are.” – Reuters