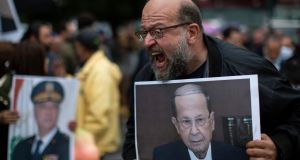 Lebanon’s political and economic crisis continued its downward spiral on Friday as Beirut’s coronavirus committee debated whether to extend a two-week nationwide lockdown beyond Sunday.

Firass Abiad, director of the Rafik al-Hariri hospital, which is Lebanon’s main Covid-19 care unit, said that although a rise in cases was due to infection before lockdown, the choice was to lift or continue lockdown while infection and unemployment rates both soar.

Dr Hariri tweeted that high test positivity and Covid cases demanding intensive care “can only result in worsening the current situation”, but also warned than extending the lockdown without financial aid for the needy, who account for 55 per cent of the population, would be “devastating”.

Lebanon has suffered 122,000 cases and 974 deaths in the pandemic, the majority since September, while unemployment has reached 40 per cent.

The bankrupted state cannot provide a safety net. Instead the central bank has announced it will lift subsidies on fuel, medicine and flour by the end of the year. This can only compound the suffering of Lebanese living below the poverty line who rely on charities to provide some relief.

French president Emmanuel Macron has announced a plan to convene a conference on Lebanon on December 2nd, but he has repeated his warning that Beirut will not receive $11 billion (€9.2bn) in foreign funding agreed in 2018 until a government of independent experts capable of dealing with the crisis is formed, and the politicians adhere to a road map he presented in September.

He has urged “all political forces to set aside their personal, sectarian and factional interests in order to attain the supreme interest of Lebanon and the Lebanese people”.

Nevertheless, Lebanon’s discredited politicians continue to erect road blocks on the route to recovery. They remain deadlocked over the character and composition of a new cabinet.

The two main Maronite Christian parties have rejected a new electoral law tabled in parliament. They claim it would weaken the political clout of their community by changing the sectarian system of governance installed by colonial France before independence.

The majority of Lebanese demand that the system, which is seen as the cause of political stasis and economic collapse, is replaced with a secular, democratic system, the very alternative rejected by the corrupt political elite from all communities.

Due to a failure to provide essential information, New York-based financial services firm Alvarez and Marsal has resigned the forensic audit of the central bank demanded by the International Monetary Fund as the primary condition for providing $10 billion to rescue the economy.

Lebanon’s consul in Istanbul, Mazen Kabbara, has warned Lebanese who pay smugglers to transport them to Europe that they could be abandoned on the Turkish-Bulgarian frontier.